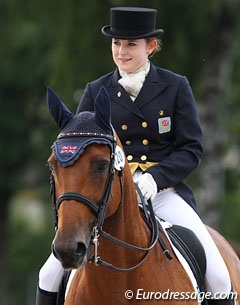 Sheepgate Equestrian Centre will play host to around 250 young rider combinations at the Under 25’s British Dressage Championships this week (20-25 August). Over 40 classes will run across the six-day event, and competition promises to be fierce as Great Britain's top young riders go head-to-head.

The Under 25’s Championships is the highlight of the young riders’ domestic calendar. Classes include everything from Young Horse, Intro and Pony classes, all the way up to Grand Prix. There is also a regional team competition, run in conjunction with BYRDS. Over the course of the event, judges anticipate watching over 1,000 tests as riders compete for the Under 25’s titles as well as some fantastic prizes.

The Under 25’s Championships provides a great opportunity to see some of the country’s up and coming riders and potential future stars.

Many of today’s top riders have competed at the Under 25’s Championships in the course of their careers, and the Championships have been a stepping stone on to great achievements. Double Olympic gold medalist Charlotte Dujardin competed at the event in 2004 and Maria Eilberg, Charlie Hutton, Anne-Marie Perry, Sophie Wells, Henry Boswell and Alice Oppenheimer have also taken part in the past.

Scores from Day One can be viewed here.