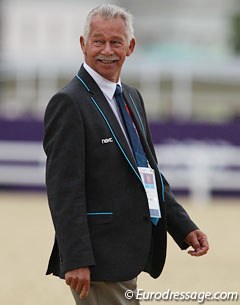 Wrapping up the 2012 Olympic dressage the kur to music individual final was a chance for riders to take those extra risks and design a unique musical performance that would illustrate their own strengths! "The level of the Kür was so high, with brilliant riding and a wonderful
interpretation of the music," says President of the ground jury, Stephen Clarke.

Taking her seat on the long side at B German judge Evi Eisenhardt, who was making her debut as an Olympic judge in London, initially took on the role of judging so she could stay connected  to the animal she loves.

"I got into riding as a child, and later as I realised that jumping was not for me, as I had no eye for distances, I started in dressage. I became a judge primarily because I wanted to stay in the sport and be with these wonderful animals, long after stopping my active career."

One of 5 "O" judges in Germany Evi was impressed by the level on display throughout the four days of dressage, but says of course the finale was the icing on the cake. 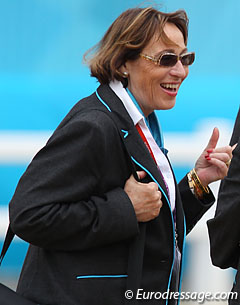 "I found the last rides to be all sensational! I particularly loved the music from Charlotte."

There has been argument that the mistake from Charlotte may have put her rival slightly ahead, but Evi says that overall Charlotte was still the stand out combination!

"Charlotte's last transition from canter to piaffe led to one lower mark for the piaffe. But, as Charlotte had a lot of other high marks for this lesson, at the end, this mistake had not too much influence."

Fully agreeing with her team mate, Stephen adds that Charlotte's music stood out above the rest and possibly struck a patriotic bell as well.

"Charlotte's pirouettes to the chimes of Big Ben brought a lump to the throat of everyone! All the riders had great music, but Adelinde and Charlotte got the perfect ten for their superb interpretation!"

National pride wasn't the only thing that Friday's performances invited with many of the Kürs bringing a smile to the faces of its captivated crowd.

"I was amused that Carl managed to have the vocal part of his music arranged to say 'long live the King," says Stephen. 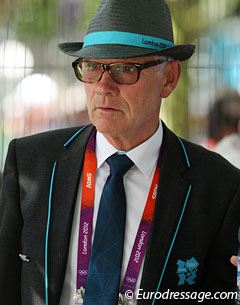 Danish judge Leif Tørnblad says "the entire atmosphere on the arena was fantastic," suggesting the location was the perfect host for such an event! "London proved that the kür can also be good at outdoor shows," says Leif.

At his second Olympics in a row Leif was of course excited by the new talent, but also loved to see one of the dressage greats prove her Kür talent yet again.

"Adelinde and Charlotte set a new high standard for how good it can be. But I also found it very touching seeing Anky and Salinero in such great shape.  Anky's timing and feeling for her music is, as always, fantastic!"

As a young rider and journalist I  have enjoyed very much getting to know the people from within the judge's box, and hope that perhaps other riders or dressage enthusiasts will be inspired to take up the judging challenge. Who knows, maybe one day, you too, can represent your nation at an Olympic Games? Until then, some final words from the 2012 president of the ground jury, Stephen Clarke:

"For me, the most wonderful part of these Olympic Games was the feeling of camaraderie between everyone who was involved - the riders, trainers, judges, organisers and especially the fabulous volunteers. Thank you!"