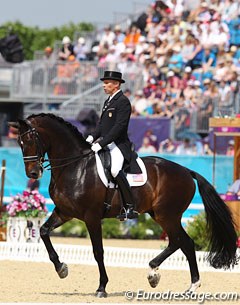 The equestrian competition at the 2012 Olympic Games ended today and the U.S. medal drought continued. Steffen Peters and Ravel carried the weight of a nation into main arena for the Freestyle, which would determine the individual medals

, and the most consistently clutch combination in U.S. Dressage history didn't have the day they were hoping for. Great Britain did.

Charlotte Dujardin scored a historic 90.089% on Valegro to win individual gold on the heels of the Team Gold she scored earlier in the week. That Gold was the first dressage medal ever won by Great Britain, Dujardin and team mate Laura Bechtolsheimer (on Mistral Hojris), who won Bronze, tripled that count in one afternoon. Adelinde Cornelissen and Parzival scored silver for The Netherlands.

Ravel, who has been so reliable through the last four years, was visibly distracted during his test. Mistakes meant the mark suffered at 77.268%. This horse's resume is clearly so much stronger. The 14-year-old KWPN gelding owned by Four Winds Farm was fourth individually at the 2008 Olympic Games, he won the 2009 World Cup Final, the 2009 Aachen CDIO, won two Bronze medals at the 2010  World Equestrian Games and has twice been the U.S. Grand Prix Dressage Champion. He's a modern day legend for the American sport. But today was not his day.

"I had a super warm-up but he was definitely a bit distracted," said Peters. "He kept looking around in the trot extensions and the canter extensions. If you remember Ravel for his career and you put it all together - this is just a little glitch today."

"He's an extremely generous horse and one of the best horses anyone could ever ride. This is it for him. Unfortunately this is it for him and that is why it is so sad that it didn;t work out today. It just wasn't a good freestyle and it wasn't the way I wanted to finish this." 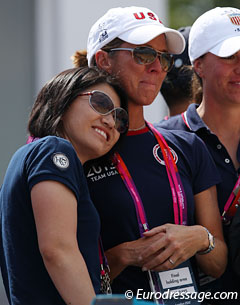 For Peters (San Diego, CA), the disappointment was made greater by the fact that he and Ravel's owners Akiko Yamazaki and Jerry Yang have made the difficult decision to retire their wonderful horse.

"It is very sad that it happened at the end of his career but I still love him," said Peters. "He has given us so much just not quite today... he was just distracted in there."

There were some wonderful moments in Ravel's work as always, and the level of difficulty, including the two-time changes on a circle, which Peters said they added today. He finished his test with riding passage with one hand.

"He owes us nothing," said Peters of Ravel. "We owe him everything."