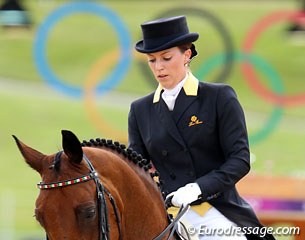 The final day of Olympic equestrian events comes to a conclusion at Greenwich Park with the dressage Grand Prix Kur to Music. The class starts at 12.30h GMT and 2012 World Cup 3rd placed finallist Valentina Truppa from Italy is first to go. We'll be posting some quick impression in each break.

First Break: We are off to a flying start here. Truppa was on very good form, horse more relaxed in the work. Kittel rode his brand new Billy Idol frestyle, works well but seem to prefer the Depeche Mode one. Need to get used to it I guess. Much emphasis on piaffe passage and very litle on tempi changes. Anna Kasprzak rode to Phil COllins music, Pepe was the perfect schoolmaster. Goncalo Carvalho absolutely rocked the house with his David Guetta kur and superb piaffe pirouettes. The crowd reacted much to his ride. Max Theurer's Phil Collins kur has so many lurics in it, it's almost distracting. Nice passage work, changes need straightening out! Tinne Vilhelmson and her The Who's Tommy kur sounded really well in the Olympic stadium. Musaic and horse very much in tune to one anothed. Horse needs to get stronger behind but made no big booboos.

I learn something new every day. While typing my comments during the second break my iPad fried: overheated. It first had to cool down before i could continue working on it. Never had that happen before. Of course I lost all I wrote. Sorry for not posting

Steffen Peters and Ravel did not put in the best freestyle of a lifetime on what would most likely be their last performance together. Shannon Peters in tears. Edward Gal and Undercover were mistake free but the horse still has too much body tension. Interesting to see where they will be at in a year. Zu Sayn-Wittgenstein dealt with a Digby running out of steam unfortunately. Anky remains to be the queen of kur. When she can decide her own floorplan and focus on her strengths with music in the background she's a star, even though Salinero was often behind the vertical. Munoz Diaz very nice but there was not the magic we all saw at WEG. Sprehe better today, piaffes were good, passage still irregular.

Langehanenberg also added a notch but two transitions from passage were hairy. Schneider was solid throughout but two mistakes. Bechtolsheimer: wow, did she recover. Still one error but the piaffe and passage were back to former glory. Carl Hester had Uthopia less energetic and together as in the Special. Funny ending to God Save the Queen. Cornelissen totally clear, passaage wqs croup high and the contact was much stronger again. Still super test. Dujardin pulled it in front of the home crowd. One small hesitation in transition from canter to piaffe but it all looked so correct and nice. Home advantage works and it was magical to see her win in front of 23,000 outrageous people.