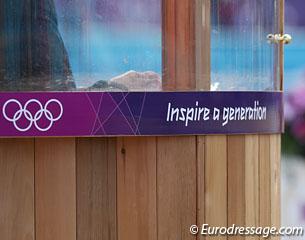 The Grand Prix Special and final leg of the team competition at the 2012 Olympic Games started at 10 am this morning with German Anabel Balkenhol as first  to go. Tune into this page often for updates on the rides after each break (unless it rains).

First to go Anabel Balkenhol made an excellent recovery but had to fight to earn points from the judges. The super expressive trot work could have put nines on the board but it didnt. The first piaffe was the most on the spot seen so far.  Mikaela Lindh preent a fitter Mas Guapo with less irregularities in the trot extensions. Van der Meer's Uzzo has ow totally ran out of steam. Mistake in the one tempi's and resistance in the piaffe. Most of the  canter work was behind the vertical. ebeling's Rafalca should improve on her overall elasticity.

Tina Konyot  was first in the second block.  Smooth, soft aids. First piaffe bit forward, second better but the transition to passage was hard. Nice one tempi's. Morgan Barbancon very sweet and easy looking, should have mre bendng in the corners. Strike off to piaffe bit difficult. Tinne Vilgelmson had mistakes in the one tempi's, horse should be stronger behind in passage but very nice in trot. Steffen Peters on good form, smoorher piaffes and passage but Ravel stumbled in the ones on the centerline and lost the movement there. Munoz Diaz very solid as always. Kittel and Scandic much better in piaffe and passage today even though horse does not sit on piaffe, contact was steady but noseband very tight and very little foaming. Mistake in the ones. Kittel rode with spiking fever. Has ben ill past two days. Holzer had a clean round, Max-Theurer struggled with the walk-piaffe transition and had a double beat in the two tempi's.

Despite a spook at F, Davison had  a more relaxed Artemis today. Truppa's Eremo also spooked in the same corner which affected the right pirouette. Carvalho on super form with a super test and super piaffe! Fassaert had some issues and couldnt score at the same level as in the Grand Prix. Schneider put top notes on the board with her smooth transitions in piaffe, passage and extended trot. Hester knew something is on the line today and rezlly went for expression and accuracy and had a brilliant test which scored 80'54%. Van Grunsven was riding as if her life depended on it. Amazing amount of (over)collection but old timer Salinero really sparkled.

Wow wow wow, Great Britain did it and won team gold. Charlotte Dujardin was flawless just like Adelinde Cornelissen but the Brit took first spot and the Dutch rider was second! Langehanenberg had an issue in the oizffe and couldnt keep Damon Hill as up in the bridle as in the Grand Prix. Sprehe had a big booboo in the passage and dropped in the ranking. Silver for germany, bronze for The Netherlands.