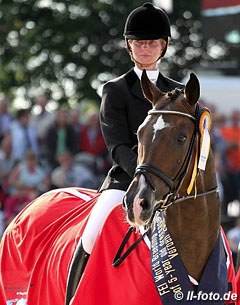 The last horse that entered the ring of the 2012 World Young Horse  Championships Final for 5-year olds in Verden made it to the champion title. It was preliminary test winner Sa Coeur (by Sir Donnerhall x Don Davidoff) under Eva Möller.

The Oldenburg gelding Sa Coeur was without a shadow of doubt the best horse of the class. Nevertheless today’s test was not his best one. In trot everything was okay. The Lewitz stud-bred bay started well balanced, cadenced, closed from behind, ground covering in the extensions yet supple and always light in the contact with a nice silhouette (9.6). The turns were with good bending, only in the first extension he had one little hiccup when he slightly lost the rhythm. The walk could not be better so it scored the only 10.0 of the day. Then the canter. It started like Thursday in the qualifier: well balanced, energetic, uphill. Eva Möller rode a courageous extension but seemed to have difficulties collecting him afterwards. It speaks for the balance of the horse, that there were no mistakes in the turn out of the corner to the counter canter directly afterwards. Today he carried his tail freely, something that was a critical point on Thursday. All in all Sa Coeur did not take as much weight on his hindlegs as he did on Thursday and was not as much collected.

“He could have been more uphill” stated the judges. Perhaps it was a result of this that there was a little mistake in the second simple change. Today the score for canter was Sa Coeur’s weakest mark, 8.9. The problems also reduced the submission score to 8.8, but the “horse is to die for” as judge Mariette Sanders-van Gansewinkel called it when she gave an overall impression of 9.6. The total was 9.38.

In the press conference Eva Möller talked about Sa Coeur, which Hof Kasselmann discovered only two months ago and she took the ride on the horse. In 2010, Isabell Werth’s former assistant trainer Rocco di Pierro had found the talented gelding at Schockemohle's Gestüt Lewitz and bought him. Two years he worked with him. This year Rocco participated in two competitions and in the second one he scored a 9.0. Shortly afterwards Sa Coeur sold to Hof Kasselmann. When asked about the future of the horse, Eva explained that he will go into the Performance Sales International auction in Ankum in December. "It’s a pity, but it’s our job," she stated. 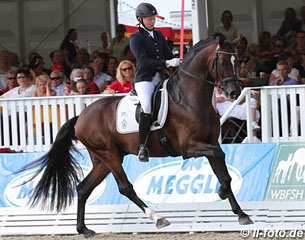 The silver medal went to the westfalian stallion Revolverheld (by Rockwell out of a Landstreicher dam), which also placed second in the qualifying test. Revolverheld is the full brother to Rock Forever, who placed third in last year’s Nürnberger Burgpokal final (breeder: ZG Könemann, Germany). Now the stallion belongs to a German owner group and Ann-Christin Wienkamp took over the training of the bay stallion, which got licensed early in 2012 for the Westfalian Breeding Society. In 2011 Revolverheld became  Westfalian regional champion and qualified for the Bundeschampionate. This year sems to go even better after all that success.

“It was already a big success to be invited here,” said Wienkamp, who trains with Oliver Oelrich, Germanys national coach for the juniors and young riders and Rock Forever's trainer. “Our goal was the final,” Wienkamp further stated. “I still cannot believe we won silver”.

Revolverheld is a nice horse with lots of elasticity in trot. He is very swingy with lots of rhythm but could be “more powerful” as the judges said (8.8). The walk is outstanding in ground cover, relaxation and clear in rhythm. If it were a little more energetic, it perhaps would have been a 10.0 too, but the dark bay scored 9.8. Revolverheld’s canter is nicely under the point of gravity, but only in some phases. There were also moments in the counter canter and in the simple changes when the horse could have been more uphill and more collected. So this was 8.9. The wish for more uphill tendency also diminished the score for submission. On the other hand the good contact was a positive aspect. So after all it was a 8.5. “For this super horse with a fantastic walk” the judges gave a 9.6 for overall impression which then summed up to an 8.98 in total. Revolverheld and Ann-Christin Wienkamp are already qualified for the Bundeschampionate. At the moment everything looks as if Ann-Christin will be allowed to stay Revolverheld’s rider for the future. 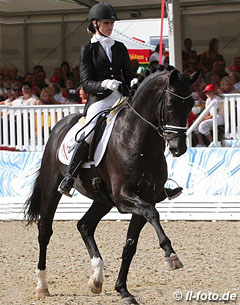 The fourth placed horse of the qualifier today won bronze: the beautiful black stallion Capri Sonne (by Rhodium x San Remo (KWPN), breeder: Steijn and R. v.d. Vliet, owner: J.C. van der Endt, The Netherlands) under Dinja van Liere, who rides for Hexagon Stables and trains with former 2006 WEG team  silver medallist Laurens van Lieren. Capri Sonne’s collected trot was very rhythmical with nice bending in all turns and a steady contact. The judges praised Capri Sonne’s uphill tendency in all moments. Unfortunately Capri Sonne completely lost the rhythm in the first extension and rushed on the diagonal. All in all it was a 9.0 in trot for the stallion that is not licensed. There is sufficient overtrack in Capri Sonne’s walk which is also clear in rhythm and energy (8.8). Highlight of today’s test was the canter: uphill, powerful, clear in rhythm, wide framed in the extensions. It earned them a 9.4. The nice contact and the overall easy going test brought the score for submission to an 8.5. The judges liked the black stallion. “A gorgeous horse” and gave a 9.0 for overall impression. He finished on an 8.94.

The former Oldenburger auction horse Discovery (90,000 euro, breeder: Josef Böckmann, owner: Heinz Bellen) under Heiner Schiergen was fifth placed in the qualifier and became fourth today. The chestnut by Dimaggio out of a Classiker dam shone in trot – elastic, closed from behind, rhythmically off the ground with lots of energy. The positive picture was a bit affected by the quite tight neck which was also often tilted. Nevertheless the quality of trot is amazing (9.1). The walk is nice but could be more energetic (8.7). The canter was praised as elegant with ground covering extensions, but the horse could take more weight (8.9). Because Discovery was not always supple, especially in canter, the submission score was  8.4. The elegance and quality were worth an 8.9 for overall impression. So all in all Discovery scored 8.8. 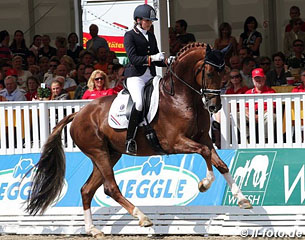 KWPN stallion Charmeur (by Florencio x Jazz, breeder: H. van Helvoirt, owner: N.F. Witte) under Emmelie Scholtens is a real eye-catcher. The chestnut’s trot is outstanding: powerful and uphill (9.5). Unfortunately the mouth is almost constantly opened and from time to time Charmeur got too tight. His inner tension broke out when he neighed several times and after the walk (7.8), when he was supposed to canter, he instead jumped forward and took the reins. Emmelie Scholtens quickly corrected this. The canter itself was uphill, powerful and very expressive (9.4). The submission scored 7.8 and the overall impression 8.8. So in total it was 8.66 and place five.

The consolation final winner, Oldenburg 240,000 euro top seller Di Magic (by Dimaggio-Rohdiamant), ended on place nine out of the 15 competitors. The lightfooted, elegant black stallion was presented in a nice frame by French Alizee Forment. He scored 9.0. In canter he got tense, had mistakes in both simple changes and struggled with the contact (7.7). This led to a submission score of 7.3. So together with 8.7 for walk and 8.0 for overall impression Di Magic finished on an 8.14.