Fantastic Farouche Does it Again in Verden 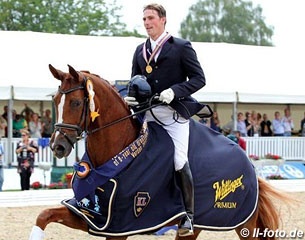 With the highest score ever of 9.88 the British Hanoverian mare Woodlander Farouche outclassed her competitors in the 6-year old Finals at 2012 World Young Horse Championships. in Verden, Germany, on Sunday 5 August 2012.
The final halt was Michael Eilberg's personal moment of triumph as the crowd went nuts.

The Fürst Heinrich x Dimaggio mare Farouche (breeder and owner: Lynne Crowden, Great Britain, co-owner: family Eilberg) was in total awareness of her superiority and stood monument-like. Eilberg balled his fist and knew he was good. Farouche was the last horse to go in the 6-year old finals in Verden. Her trot: outstanding in its cadancy, rhythm, uphill tendency, and elasticity. It was fascinating how she keeps the rhythm in the extensions. There is no haste, no hurry, only big swinging. Maybe she could have been a little bit softer in the contact in the first shoulder-in. The half passes were fluent with good crossing. 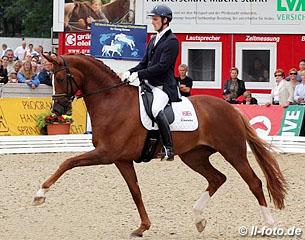 “Convincingly lightfooted”, was judge Dr. Dietrich Plewa's statement. “Expressive in every phase. Maybe there could have been a little bit more activity in the mouth. Almost perfect, 9.8.” The walk? 10.0. Any more questions? It was simply wonderful how Eilberg collected this huge natural overtrack without losing the four-beat-rhythm. There were no pirouettes like Farouche’s in today’s class. So regular, off the ground and with good bending. The canter: uphill in clear rhythm, with big strides in the extensions. The first three flying changes mirrored the quality of the canter. “They could not have been more uphill," Plewa iterated. Unfortunately the last flying change was not on the aids and in two phases. Together with the demand for a little more mouth activity, the incorrect flying change diminished the score for submission to “only” 9.7, which still was the highest in this class. The overall impression score was 10.0. There is nothing more to say about this gorgeous miracle of a horse. 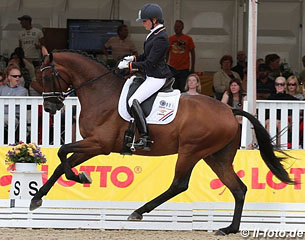 Energy, drive, elasticity, rhythm, cadency – these are the attributes that describe the reserve champion Borencio, a Dutch bred Florencio x Lord Sinclair-offspring, who won the Pavo Cup Finals in 2010 and 2011 (breeder: A.P.M. Pittens, The Netherlands, owner: Elias Agusti, Annabelle Collins, Bermuda). Maybe this was also the credit of the rider, Emmelie Scholtens, who seemed to control every single step of the bay stallion. The judges stated the contact could be softer. Nevertheless expression, especially in the cadenced and well balanced lateral movements were wonderful to watch (9.5). The walk scored with sufficient overtrack and good rhythm. Borencio’s walk pirouettes were obedient to the aids and well collected – 9.0. In canter Borencio impressed with his uphill tendency in the first half. Maybe the stallion could have been more collected. The first three changes were secure. The one before last, when the horses turn out of the corner at K in counter canter, Borencio dropped into trot, which was the only mistake in the test. Experienced Emmelie Scholtens had no problem in correcting this and the flying change afterwards was perhaps the best of the four. So after all the high quality canter scored 9.2. Because of the “swingy, impressive cadenced” test in which the horse was “in phases behind the vertical and the contact could have been softer” the score for submission was 8.5. “A horse with huge potential” stated the judges and they gave a 9.3 for general impression. Those marks summed up to an 9.1 in total and the second place. 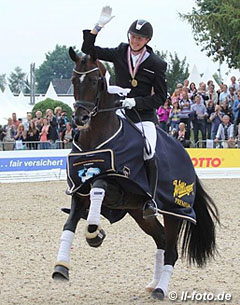 Sir Donnerhall II claimed the bronze for Germany. The Oldenburg stallion by Sandro Hit x Donnerhall (breeder: Maik Kanitzky, Germany, Owner: Henrik Nyreröd, Sweden) was ridden by Danish Thomas Sigtenbjerggaard, who trains with Andreas Helgstrand. Sir Donnerhall II is a horse with a history. He started his breeding career in the state stud of Celle, Lower Saxony, but as the Hanoverian society refused to accept him, he was sold.
Today he convinced with his naturally energetic and cadenced trot, a very engaged hind leg and movements which always go through the body. “The elasticity, dynamic and rhythm in trot are marvelous,” stated Plewa: 9.6. The walk was relaxed and clear in rhythm but was the weakest of the three gaits because it could have been more active with better ground cover. In canter the high legged bay again shone with his impulsion from behind. Nevertheless the croup was sometimes a little bit high so the flying changes were not yet secure. “There should be more uphill tendency,” said the judges in the 9.0 scoring canter.
For the good flexing and bending in the shoulder-in and half passes and the active mouth the judges gave an 8.9 for submission. They liked this “sporty, athletic stallion with lots of potential”, so they also gave an 8.9 for the overall impression, what meant an 8.78 in total. 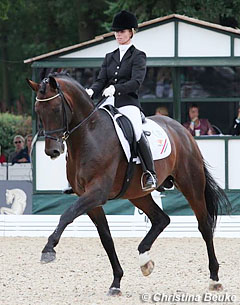 Another KWPN horse finished fourth in today’s class: Paul Schockemöhle’s United x Gribaldi stallion Bordeaux (breeder: A. J.M Lisman, The Netherlands) under Eva Möller. Impulsion, energy, and rhythm marked their test. Yet the stallion seemed to be a bit tense, not really supple and relaxed. The tail was always swooshing, especially in canter. The second flying change was in two phases, the third croup high and the last was far before the aid. Yet there is no doubt that Bordeaux is a horse with huge potential. The “elastic and expressive trot with lots of energy from behind” scored 9.5. The walk with clear in rhythm,  through the body but “could have had more overtrack”: 8.0. The uphill canter in clear three beat rhythm lacked today "a bit of suppleness in that back". It got an 8.5. For submission Bordeaux got 7.9 because of the tension before the last flying change. The “ability to collect and the expression of the entire horse” was rewarded with an 8.5 in the general impression, so after all Bordeaux scored 8.46.

Fifth was the winner of the consolation finals, Sweden's Topaasch x Sack stallion Tabasco with Anna Svanberg scoring 8.42 in total. He was first horse to go today. He is a nice “front horse” but lacks impulsion from behind in trot (8.4) and could take more weight in canter (7.9). He scored with his relaxed but energetic walk (9.2).

The Bavarian bred mare Novia (by Stedinger x Alabaster) and Victoria Michalke were third in the qualifier but today the mare seemed to be a little bit tired. Again her trot is wonderfully cadenced (9.3), but in canter she came a little bit on the forehand. Yet all four flying changes were safe and effortless (8.2). The walk should have had more overtrack although it was clear in rhythm. Unfortunately the mare got tense after the first pirouette so walk scored only 7.0. In total she got 8.36 and finished  sixth. 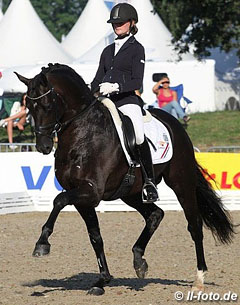 The KWPN gelding Santo Domingo (by Samba Hit II x Flemmingh) was much  better than in the preliminary test. Today Emmelie Scholtens had him much more closed from behind with energy and a lot of drive (trot: 8.7). In canter he was not enough collected (8.1) , but after all he is a horse with potential (8.6) and finished seventh (8.3). The KWPN stallion Boston (Johnson x Quattro B) received the same score as Santo Domingo. The petite black stallion and his petite rider Marieke van der Putten shone in trot, but had one hiccup in the second extension (8.8). In canter they showed very good flying changes (8.8) but they had problems with the walk, which is rhythmical but not ground covering and not through the body with a somewhat stiff back (7.5). All in all the beautiful stallion should have been less tight, what the judges downscored in the submission mark (7.8).

The Westfalian state stud-stallion Sunday again convinced the judges and spectators. He has much improved compared to one year ago. Unfortunately his walk is not the biggest  (7.2), but the trot is very energetic with lots of impulsion from behind (8.8). Today’s canter should have been more closed from behind. The first extension on the circle line was hasty without lengthening of the strides. So after all it was an 8.2 today and place nine. 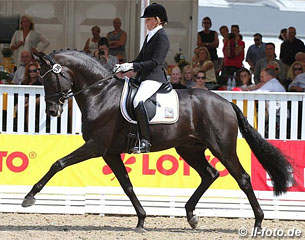 Tenth was the very gifted Danish gelding Samba King (by Sandro King x Lancet) under Danish Jim Rasmussen. His trot is outstanding: energetic and elastic. He is a big mover, but today he was often tilted, could have been better closed from behind and should have taken more weight on the hindquarters. There were also little mistakes throughout the test, such a strike-off in counter canter after the turn on the haunches. Without a doubt Samba King is also a horse with potential (7.7).

Two Oldenburger bred stallions owned by Paul Schockemöhle had a disappointing day today: Fürstenball (by Fürst Heinrich x Donnerhall) and De Champ (by Daddy Cool x Caprimond). Under Ines Westendarp Fürstenball was quite tired. In contrast to the qualifier the flying changes were safe today, but the test lacked energy from behind and Fürstenball struggled with the rhythm in the collected walk, which became rather lateral. He became eleventh with a 7.66 total. 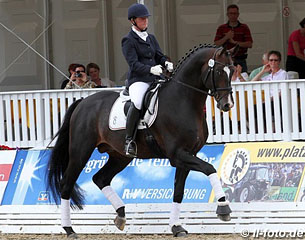 De Champ also made a quite tired impression; until the canter. He made a kick start, became tense and refused to quiet down again. So he gave his rider Anja Engelbart a hard time, who was admirably patient with him. She finished the test but had no chance to calm down De Champ.

Praise goes to the judges panel, which included Susanne Baarup (DEN), Sandy Phillips (GBR), Raphael Saleh (FRA) and Dr. Dietrich Plewa (GER), who consequently diminished the score for submission when horses were tense or too tight, and at the same time also rewarded good riding. That was really nice to see!