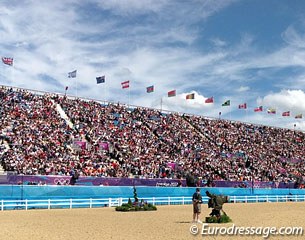 Despite all the hustle and bustle it involves, covering the 2012 Olympic dressage Games is much easier than let's say a European Junior and Young Riders Championships for instance. With only 25 riders to go per day the class doesn't start until 11 AM which gives me plenty of time to sleep, for instance, and get up in a comfortable way.

After finishing my Grand Prix part I article at 1.30 AM, I slept till 8.30 in the morning. After getting up I ate my last plate of goat milk oatmeal porridge before I poured the rest of the milk bottle down the drain. Disgusting! I wrote my blog and prepared my gear to head to Greenwich Park. One hour before the class started I went to the stadium to find myself a spot to photograph from. I decided again for the short side at A but moved a few meters to the left to get the Olympic rings better in the background.

With the best riders to go today I was wondering whether the points would still be so strict or whether the judges would go up as they have more tests to compare a performance with. Tina Konyot kicked off the day. At the 2012 U.S. Championships almost two months ago she had scored an 80% in the Special but something in my mind told me that she wouldn't get such an inflated mark here on European soil. Konyot presented an improved Calecto, but with a few bobbles in her ride her score was 70.456%. Still the bar had been set and the day was to be a glorious one. 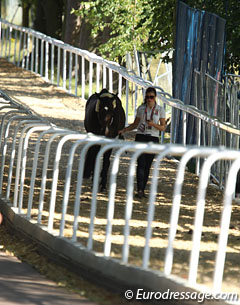 What surprised me the most was the enthusiasm of the British crowds! Of course the audience is a mix of nations and there atypically seems to be a larger German delegation here than a Dutch one, but overall the most people in the stands seem to be Brits. When Richard Davison finished his test the stadium seemed to explode and the sympathetic Richard even added to the spectacle by putting his hand to his ear and asking the crowds to roar even loader. The noise they made was unbelievable, but nothing compared to what was to come when Charlotte Dujardin completed her ride on an Olympic record score.

The stadium went absolutely wild with enthusiasm. Clapping, chearing, whistling, shouting, even stamping their feet. A moment I thought the stadium's scaffolding would collapse under the roar and beating drum sound of feet. I got goosebumps all over my body and have to admit I almost got emotional, which doesn't happen very often as I work with much concentration and try to block out emotions when I look at a ride. The cheering, however, was magical and it felt like you were at the Colosseum in Rome during a gladiator fight. I'm sure everyone was very much entertained!

When the class was finished I headed to the mixed zone to do some interviews with the riders but today I was stopped by a security guard who told me I had to go round the entire stadium to get to the zone, instead of walking 10 meters straight onwards and being there! Ai carramba! I was mumbling and grumbling a bit but fortunately I made it round on time to catch Helen Langehanenberg and Adelinde Cornelissen for an interview.  I had hoped to pin down Carl and Charlotte as well, but they were nowhere to be seen. 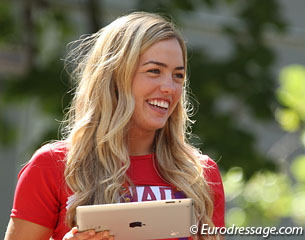 My next plan was then to head to the area where the horses cross from the stables to the warm up rings. It turned out to be a perfect spot to do some paparazzo work, i.e. taking people shots! Of course it raised suspicion with the guards who came to check my badge. One rider after the other passed through and I got some fun photos of the grooms at work, as well as the riders. I also saw the legendary show jumper Hans Gunther Winkler stumbling by. He was helped by Swedish team vet Jonas Tornell as the old German legend walks very insecurely and crooked at the moment. I felt sorry for him. You realize life can be so fleeting when you see an older person.

I caught Steffen Peters there for a five-minute talk, but he warned me that he might have to run to the loo as he had to do a drug test and had drank so much water his blatter was about to burst. While I sat there, more riders and officials approached me and it was fun catching up with them. On my way back to my room I stumbled into some more riders and it was surprising how many of them were complaining about the judging. "How can this person score so much, there must be something going on. It's fixed" or "why do I get such low scores while a horse constricted in the frame scores so highly." Another person said, "if I hear the word 'solid' one more time, I'm going nuts!" 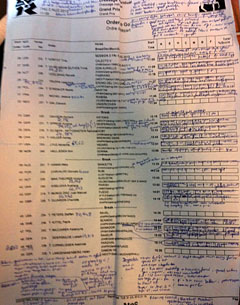 The Olympic Games bring a lot of pressure and riders want to live up to the expectations. I agree it must be frustrating when you score 70 - 75 or 80% throughout the season and you come to the Games and get 5% lower for a similar ride. It raises questions. Overall I thought the judging in the Grand Prix was pretty good with a few exceptions. A few riders were scored highly despite irregularities in the gaits or a cranked curb contact throughout the test, yet their horses were brilliant. Some believe they were underscored despite having had a good ride, but I then saw for instance too much overall tension or absolutely no bending in such horses and can again understand the judges' marks. Maybe it's in people's natiore to complain. I've never heard a rider complain that he got too many points ;)

I spent the entire evening working on my huge Grand Prix article. I'm often asked how I remember each of those riders in such detail and my answer is "I don't. I take notes."  With 25 top riders to go on one day I have to scribble down all the details of their test in order to produce such lengthy, blow-by-blow accounts. No matter how much I love photographing the classes and taking notes I sometimes dread starting to write an article as I know beforehand it's going to take six hours to complete. It took until 2.30 AM to finish my GP report as well as uploading about 50 images. You can imagine it took me 30 seconds to fall asleep as soon as I went to bed.