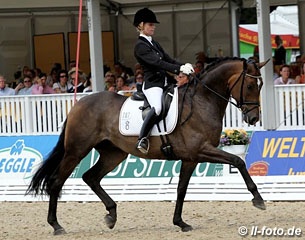 Thirty-nine 5-year old dressage prospects today tried to qualify for the final of the World Young Horse Championships in Verden. The horses were judged in five groups. The winner of each group goes directly to the final. The other ones have to qualify through the consolation finals. Four of the five top horses were bred in Germany.

Eva Möller and the beautiful bay Oldenburger Sir Donnerhall x Don Davidoff gelding Sa Coeur (bred by Gestüt Lewitz, Germany, owner: Hof Kasselmann KG, Germany) were the overwhelming winners of today’s class. With a sensational score of 9.18 in total they outclassed the rest of the competitors. In trot and canter the gelding stood out with his rhythm, elasticity and energy from behind, all movements very much off the ground. The contact was steady with a good self carriage. The counter canter was already well balanced. A real highlight was the walk, which was hard to imagine more ground-covering yet still clear in the rhythm. The only thing one could criticize was the tail which was not freely carried throughout the test. One little mistake occurred in the simple change, when Sa Coeur started for a second in the wrong canter, but Möller managed to correct this quickly. The other tests of submission, the halt and the rein back, were accurate and obedient. Each time Möller rewarded her horse for those with a pat; nice to see! The score of 9.18 was the average of a 9.3 for trot, 9.8 for walk, 8.5 for canter, 9.0 for submission and a 9.3 for general impression. 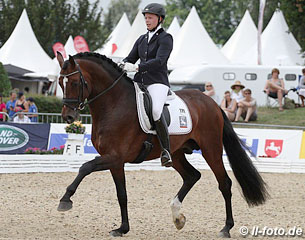 Second best horse of the 39 participants was the licensed stallion Revolverheld by Rockwell-Landstreicher (breeder: ZG Könemann, Germany, owner: BG Revolverheld, Germany), the Westfalian fullbrother to Rock Forever, who placed third in the Burgpokal-Final 2011 under Oliver Oelrich. Ann-Christin Wienkamp rode the bay, whose walk is almost perfect with much groundcover and regularity (9.5). The trot work is rhythmic and elastic. Perhaps it could be a little bit quicker from behind and more actively off the ground (8.2). Another highlight is the canter which is uphill, already well collected, very energetic from behind. He jumps far under the point of gravity (9.0). Although the rein back was not really diagonal the judges awarded a 9.0 for the soft and steady contact, the smooth transitions and the nice stretching of the neck when Ann-Christin Wienkamp gave the reins. “Very Good” was also the general impression, so the allover score was 8.94. 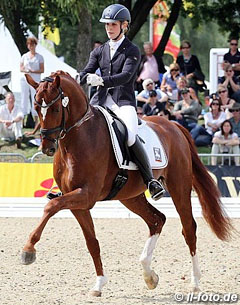 Third place went to Lord Carnaby with Beatrice Buchwald. The licensed Rhinelander stallion by former Bundeschampion and reserve 5-yo World Champion Lord Loxley out of a Rocket Star dam (breeder: Peter Schweimanns, Germany, Besitzer: Dr. Manfred Hödl, Germany) got an 8.84 in total. The chestnut is a very elegant horse with three outstanding gaits. Especially the trot work is the way you want to have it: active, off the ground and with good lengthening of frame in the trot extensions. It looked as if there were little moments of tension in the canter which might be the reason why Lord Carnaby got “only” an 8.8 in canter and a 8.6 for the submission. The general impression was worth a 9.0.

The first non-German horse at the top was the impressive KWPN stallion Capri Sonne by Rhodium x San Remo (breeder: Steijn and van Vliet, the Netherlands, owner: Anne Mette Kjer Rossen, the Netherlands). Under Dutch Dinja van Liere the beautiful black excelled in trot with a 9.0. The weakest of the basic gaits was the walk with an 8.3. Almost as good as the trot was the canter which was impressively uphill, 8.9. The entire round was very harmonious and nice to watch, so the judges gave 8.8 for submissiveness and a 9.0 for general impression.

The highest scores in trot went to the two licensed KWPN stallions Charmeur (by the two time young dressage world champion Florencio out of the dam that also produced Bretton Woods by Jazz) with Emmelie Scholtens (NED) and Chippendale (by Lord Leatherdale out of a Negro-dam), ridden by the Spanish Severo Jurado Lopez who trains in the Netherlands. Their spectacular trot which was not always regular but sometimes a little bit tense was rated with a 9.4 for Charmeur and 9.5 for Chippendale. Unfortunately both horses failed in walk. Charmeur’s one was still rhythmic but with hardly enough ground cover, 6.2. Chippendale’s was even weaker. The score of 4.5 speaks for itself. So Charmeur ended up as number 15 in the ranking. Chippendale, who was quite tense throughout the entire test, ended up as 34th.

All in all it is worth to mention that the jury, Maria Collander (FIN), Sandy Phillips (GBR), Raphael Saleh (FRA), Dr. Dietrich Plewa (GER), did a very good job today using scores in a wide range from 4.5 to 9.8. Tomorrow there will be the first qualifier for the six year olds.