Niels Bax and Bentley to Replace Sekreve at 2012 WCYH Verden 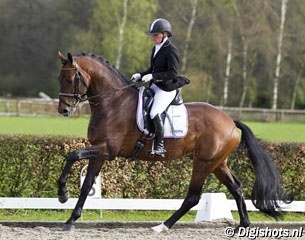 Niels Bax and his 6-year old Bentley will be replacing Jennifer Sekreve and Brokaat at the 2012 World Championships for Young Dressage Horses in Verden on 1 - 5 August 2012. Sekreve injured herself last Friday in a riding accident.

On 27 July Sekreve fell of a horse and sustained a severe concussion. She will not be fit to ride her 6-year old mare Brokaat (by Samba Hit II).

"Nothing much happened actually," said Sekreve's employer Johan Hamminga. "The horse got stuck with his hoof behind a wooden board, but it startled the horse so much that both fell. Jennifer sustained a severe concussion. She is still in the hospital and doing reasonably. She has pain all over her body but nothing appears to be broken. She'll have to stay there for a while though. Of course she's very disappointed not being able to go to Verden."

Niels Bax, who is based at Stable De Ijzeren Man in Weert, will be replacing her on Bentley (by UB40).