Pia Fortmuller Reserving Herself a Spot for the Future 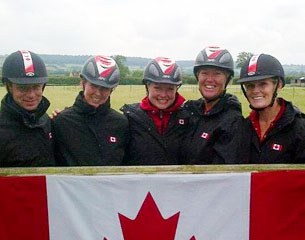 Moving to Germany three years ago, Canadian Olympic team reserve Pia Fortmuller was determined to follow her dream. "I moved with the goal of representing Canada at an International level," Fortmuller said. "It was a dream come true to qualify as the reserve rider for the Canadian Dressage Team!"

First dreaming of the Olympics as a little girl, Pia remembers how in school, when she was asked to write down what she wanted to be when she grew up, her answer was always the same: "An olympic dressage rider!"

Finding her match in Leslie Reid's 2008 Olympic mount Orion, Pia went all the way to London with him and says the partnership is one that they both could not have lived without.

"Orion and I have a very special relationship because we both needed each other. Orion needed someone who believed in him, and I needed a horse to show me the ropes in the Grand Prix ring and I am speaking from my heart when I say I could never have dreamed of a better team mate." As reserve rider Pia hopes not only to share in the experiences of her "amazing" team members, but also to keep her ears and eyes open in the hopes of earning an actual team spot and own centreline in the future!

"Everyone has been very supportive especially because I am the youngest on the team, everyone has really made an effort to take me under their wing, making this a very inspiring experience for me.  My hopes for the games are that I am able to learn as much as possible, in all aspects: training, preparation and management, so I am that much more prepared and ready for the next opportunity to make it on to the Canadian Team."

Inspired by Dorothee Schneider, Pia says Dorothee is not only a great rider but also an inspirational role model because through her dedication and determination she has really worked her way up to the top.

"But my trainer is Heike Kemmer because she has achieved so much in her life. She has an insurmountable amount of knowledge to pass on. What I appreciate most about training with Heike is that as a result of all of her experience she is always looking at the big picture, so she has not only taught me an incredible amount in the fine details of training, she has also taught me about the importance of management of both myself as a rider and my horse." 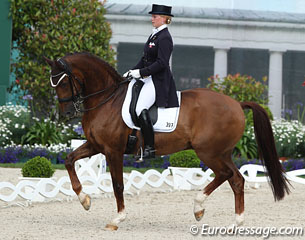 Pia says the reason she moved to Germany is because she wanted to work with and learn the classical art of dressage.

"For me the absolutely most important and vital aspect of my dressage training is that the horse is enjoying his job. Just like happy cows produce better milk, I believe that horses who love doing their job add that extra shine to the the show ring. Orion has a real talent for passage, so he has no problem dancing around the ring with his knees reaching for the sky!"