Lyndal Oatley and Patrik Kittel: Partners off the Horse, Rivals on It 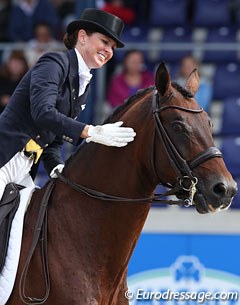 United in both their love of dressage, and their goal to make the Olympics, Patrik Kittel and Lyndal Oatley plan to spend their lives together, train together everyday and inspire each other to do better, but will compete against each other on behalf of their own countries, which happen to lie on polar opposite points of the globe.

“So far, being a husband and wife team training together has been very simple, as we keep it this way!" says Australian team member, Lyndal Oatley. "When we train, Patrik is the boss, and I ride as a student. After riding though, we are back to normal. We are able to work well together and really understand what the other needs at each moment, so for me it is a huge relief and advantage that it works so well. I always say we are still happily married so we must be doing something right!"

But the goal of qualifying for London is a hurdle no matter who you are or where you come from, and Lyndal says that both were fortunate enough to earn a clear spot!

"Patrik and Tinne were clear stand outs for the Swedish team, and the battle was really for the final spot.

For Australia we had 8 strong combinations, with a couple able to pull scores in the high 60’s to even over 70.  I was fortunate enough to have topped both qualifiers to grant me immediate inclusion into the team.  BUt with  8 of us contending for only 3 positions, the chances were this was going to be more than difficult, however, to make our Australian team  we did not need the high percentages Patrik and Tinne can produce. So let's just say it was difficult to qualify in either team for different reasons, however Australia would be the ‘easier’ of the two nations....if there is such a thing.”

Dreaming of competing at an Olympic Games since she witnessed the excitement first hand in Sydney 2000, Lyndal is honoured to be part of the Aussie team for 2012.

"The Olympics in Sydney, watching everyone compete, sitting in the stands and seeing  such a high level of competition...inspired me to strive for exactly the same level of professionalism in my own training. This became my goal!"

In a team consisting of both experience and family, Lyndal has already enjoyed the lead up to London, and says the Aussie camp has been filled with a happy blend of  laughter as well as authority…. "The team consists of myself, Mary Hanna, my cousin Kristy Oatley and Rozzie Ryan.  This has already been a great team to be involved with and I could not be luckier to have such positive and experienced people around me at my first Olympic campaign. With Kristy I joke around a lot, as cousins do, so I feel for all those around us at times as we often don’t take ourselves too seriously. However, this can change and Kristy can talk to me in a tone only a family member can, and  put me into place very quickly , much to the amusement of the rest of the team!."

Lyndal's ride in London, Sandro Boy, is an 11 year old Sandro Hit offspring, who she says is a true sportsman.

"He is a sweet-hearted character who likes to please. He is so enthusiastic that he is like riding a rubber ball, and is always fun to ride.  He has learnt everything very quickly, and has been such a good sport throughout the whole Olympic campaign. The Olympics will only be his 7th International Grand Prix, after  beginning the “Big Tour” at the end of 2011."

While her Olympic team will be there to share in the Aussie campaign, Lyndal's personal team is also of great significance, and training and living in Sweden is only possible because of all her outside support.

"I have such a great team and would not be here without them.. My family, and in particular my mother, have supported me and been there for me every step of the way. Of course Patrik is a major component to this team, and has really helped develop Sandro Boy and me into the partnership we are today. Then there are all those surrounding you in the Games, such as our chef Deb McNicol, my team mates, Ton de Ridder, and the Equestrian Australia entourage who go above and beyond to support their riding representatives!"

As her partner Patrick takes to the arena for Sweden, Lyndal says there are many positives to having a bi-national dressage marriage, but of course there are some difficulties... 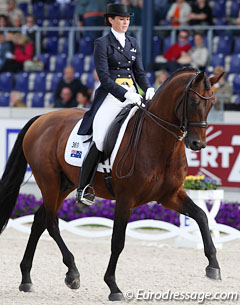 "Balancing Patrik’s needs with my own during the lead up to, and including, the Olympics was hard at times. I want it to work for both of us, but the schedule may make this difficult. Overall however, our marriage is really a bonus.. You don't have to deal with a jealous partner when you spend too much time at horse shows, or with your horses. And you can talk about your rides to no end without worrying about boring your partner to tears. I never have to explain to Patrik why I live and breath horses as he thinks exactly the same way as me.”

Hoping that Patrik can schedule in her Olympic warmup, Lyndal says she must also have a back-up plan, in case the times do not allow it..

"It will depend on the draw, so we will see. Of course I would love Patrik to warm me up as this is our routine, but we need to balance what works best for both of us. This will not be easy this Olympics... but we will make it work. Our team advisor Ton de Ridder will step in if the schedule allows, so I have a plan A and B and we just keep our fingers crossed that we reach a plan that suits everyone."

Aiming for a solid and expressive Grand Prix performance, Lyndal would love to gain a spot in the Special but would be happy just knowing she did her best!

"At the end of the day though I just want to go down that last centre line knowing I DID THE BEST I could for me and my horse, leaving the arena with a positive and confident feeling."