Veterinarians on Stand-by for Healthy Equines on the Olympic Centreline 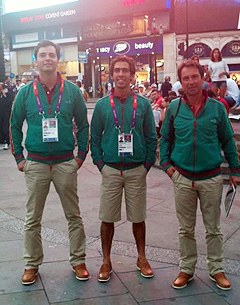 Chosen as the personal vet for the Portuguese individual dressage competitor Gonçalo Carvalho Conchinhas, Vasco Amaro Lopes landed last week and headed straight to the stable of Kyra Kyrkland who kindly offered Goncalo a training pad in the lead up to the 2012 London Olympic Games.

"It was a great honor to be invited as the vet for Rubi in London, " says Vasco. "It will be my first Olympics, and I am excited to be part of the games."

With one vet for every team, plus one for every individual rider, Vasco says there will be around 30 vets in London.

"The vets do meet up, but not that often, just to socialize a little."

Invited by Goncalo, Vasco is, however, only authorized to treat Rubi, and cannot offer veterinary advice to members of other teams or nations.

"We cannot treat other equine athletes," says Vasco. "However, if we see something we are not happy about we can lodge a report with the veterinary commission."

Working with Rubi for over 18 months, Vasco has been to Greenwich to check the facilities and says they are first class.

While each rider will be cared for by their team or personal vet, there is also a Foreign Veterinary delegate, chosen to oversee the entire operation.

As a member of the Veterinary Committee, Kent Allen from the USA has previously served as a veterinary official at two Olympic Games (London 2012 will be his third) and at the 2010 World Equestrian Games.

Fulfilling this role in London, Kent  is well-known for his work as a sport-horse veterinarian and lameness diagnostician. Obviously required to be from a nation outside the hosting country, Kent had the important pre-Games role of working with the Olympic organising committee to manage and make sure all veterinary and medication control infrastructure was up to scratch!

In London the FVD will work closely with the five members of the Olympic equestrian Veterinary Commission, who together will supervise all the veterinary procedures throughout the duration of the games.

With the FEI Veterinary Regulations taking up more than 90 pages, many of the rules may come as quite a surprise, particularly that Veterinary officials, including Kent, are forbidden from hands-on veterinary care, with the  treatment of horses falling to the designated "treating veterinarian(s)," who may administer FEI-legal treatments with approval from the Veterinary Commission.

However, as stated previously, vets chosen by individual riders, or appointed to a team by the various national federations, are also granted jurisdiction to grant Veterinary care, provided it is ONLY for their athlete. But there are several other processes that the Veterinary commission must oversea during the games, including drug testing and the all important horse inspection (trot up).

Designated testing veterinarians will be on site to take blood and urine samples, sometimes at random, and LOCOG have warned that the number of horses tested in London will be the greatest ever witnessed at an Olympic event.

Ready to move with the one man Portuguese team to Greenwich on Sunday, Vasco, will be on the ball, ready to make sure Goncalo has the smoothest ride possible up the golden centreline!