Martin Dockx and Grandioso to Step in for Delgado, Faberge Reserve 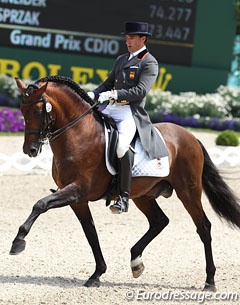 With the withdrawal of Beatriz Ferrer-Salat's Delgado from the Spanish Olympic team, the opened-up team spot has been filled by travelling reserve Jose Daniel Martin Dockx and Grandioso. Ferrer-Salat's Faberge will be the new reserve horse.

The Spanish Equestrian Federation spoke of a "leg injury" which arrested Delgado's 2012 Olympic participation, but also mentioned a hoof problem as the Westfalian gelding was shod with that special aluminium shoes to reduce vibration right after the 2012 CDIO Aachen.

Beatriz Ferrer-Salat's Hanoverian gelding Faberge (by Falkland) has now become the reserve horse. Each team can replace a horse up to one hour before the 2012 Olympic Games' vet inspection, which will take place in the afternoon on 31 July 2012.

"I am very sad for Bea and the Spanish Team with the news that the spectacular Delgado is currently unfit to compete," said Grandioso's owner Kim van Kampen. "However we knew that Grandioso's job in London was to be ready in the case that he was needed and so I am confident that both Daniel and the horse are prepared to do their best."