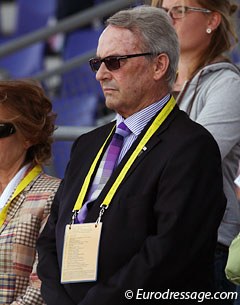 With the advancement of technology in the world of modern day sport, athletes rarely need to suffer the sometimes very damaging effects of simple human error. The seven 5-star judges selected to mark the Olympic Dressage in London are all highly experienced, motivated and engaged individuals, but they are human, and in a contest of champions, a blink of the eye could make the difference between gold and silver!

The FEI introduced the Judges Supervisory Panel, a small team of very well respected equestrian intellectuals to take up the role of supporting the Olympic judges in their massively complex and difficult task, has resulted in a positive outcome.

"Initially judges were rather sceptical of our role," says supervisory panel member David Hunt. "But once they realised we were there to support them, and give them greater confidence in their role, they were happy to have us on board."

Introduced in 2011 to provide an official back-up system to correct marking errors at all the major events, the Judges Supervisory Panel (JSP) in London will be a three man team from around the world, focused on ensuring that any mistakes are quickly rectified.

"We cannot alter the subjective opinion of any judge. We are there as a back-up, a safeguard, to ensure that the mistakes that can be so easily missed in a split second of distraction, are made right!"

Members of the London 2012 Judges Supervisory Panel include David Hunt (GBR), Dieter Schule (GER) and Jan Peeters (NED). Their role ,  sitting in a small room together, will be to  analyse the tests as they take place.

"As President of the International Trainers Club, I was chosen as the trainer member of the panel, with the other two being 5 star judges," says David.

When I was asked to supervise in London I was absolutely thrilled...I feel it is such a great honour, not only because I get to be actively involved in the Olympic Games, but also because it means the world's best judges respect and trust me enough to hand this role to me." Having attended many of the major judging conferences around the world, David has given lectures on the important and difficult role judges play in the sport of Dressage, thus helping to ease any doubts the judges may have had over his supervisory presence.

"Once they could see how much I valued their role, they realised that a supervisory panel would allow  them to judge and make the tough decisions,  knowing that should they accidentally miss a technical flaw, their JSP supporters will quickly rectify the mark!"

With the computer screen in front of them, David will watch keenly, as the other two follow the marks of each judge. If David sees that there was a mistake in the one-times, he will alert Jan and Dieter, who will check to see if all judges picked up on the mistake.

If one judge gives a 7, while the others score it a 3, the 7 will be immediately altered, meaning the test score will be accurately finalised the minute the rider has completed the test!

"Judges don't have the luxury and time of computer play backs, and slow motion monitoring," says David. "If there is any obvious error we can watch, and re-watch, to ensure that the riders are given the fairest possible shot at their deserved ranking."

But the role of the JSP doesn't end there, and the follow up meetings, one after the two days of Grand Prix, and another after the Special, will unite the entire judging entourage, and open up the communication channels for continued improvements in judging fairness and accuracy.

"We will be present at all the judges meetings to offer feedback, suggestions, and comments on anything that we may have thought needed attention."

Having been tried and tested now at many of the major CDI competitions, David says the panel is now running very smoothly, however there were a few controversial issues in the beginning. 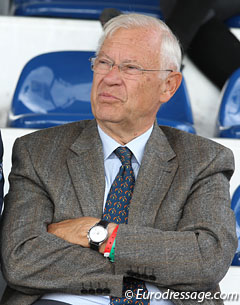 "In the early days there was a dispute over the marks awarded for a rider's piaffe. The rider carried out 6 steps of piaffe, when the test requires 15. Some of the judges awarded a rather generous mark, saying the quality of the piaffe was good, so the mark was deserved. BUT, the panel felt that if it was one-times, and a rider did only six, they would be severely punished, so this should be no different! Our aim is only to make it fair on all the riders, and support the judges in achieving this goal."

With very good feedback coming from the riding community, David says riders feel it is a great positive for the sport, as they can feel sure they will be marked in direct accordance with the test they produced!

"Unfortunately having a JSP is quite expensive , so at the smaller shows, people have been wondering if it would be possible to get even  one of the panel members to attend, if only just to be a part of the judges discussion."

Currently there are only 4 people in the world qualified to act on the JSP, but David says the FEI is constantly searching to expand the pool, and they were hoping to already have at least 6 names in the barrel.

"It is just very difficult to find people that have not only the qualifications, but the respect of the judging community," says David. "That is of course why I feel so privileged, and cannot wait to take my seat arena side in London!"