How the 2012 Olympic Dressage Competition Will Play Out 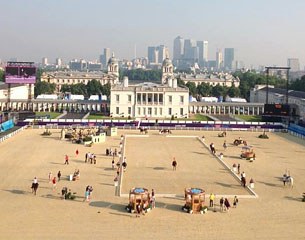 The Dressage event at the 2012 Olympic Games in Greenwich Park starts with the first Horse Inspection on 31 July 2012 and brings the equestrian competitions at London 2012 to a close on 9 August 2012.

The Team medals will be decided after the Grand Prix Special on 7 August, which is also the second Individual qualifier from which the top-18, and those tied for 18th place, will go through to the Freestyle Final two days later. The Freestyle to Music is a stand-alone competition from which the individual champion will emerge.

Teams consist of just three riders, and with all three scores counting there is absolutely no margin for error. And there is no breathing space either.  Previously the team result was based on performances in the Grand Prix alone.  However at London 2012, for the very first time, the results of both the Grand Prix and the Grand Prix Special will be combined to decide the final team classification.