Going for Gold at Greenwich 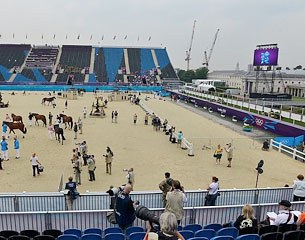 In less than seven days time the best dressage riders in the world will enter an arena, on a world class surface, above a park steeped in history, wildlife and ancient habitats, at the very place were time begins! "Greenwich Park has a unique history, and is part of the Maritime Greenwich World Heritage Site, says spokesperson Eulina Clairmont of the Royal Parks Office.

“The Park is home to the Royal Observatory and also the Prime Meridian line, which is the reference for Greenwich Mean Time – the centre of world time," Clairmont added. "The Park also provides a setting for several historic buildings, including the Royal Naval College, the National Maritime Museum and the Queen's House.  The Park has an intimate history with many monarchs - Henry VIII and his daughters Mary I and Elizabeth I were born in Greenwich and this year Greenwich became a Royal Borough as part of the Queen’s Diamond Jubilee celebrations."

London's oldest enclosed Royal Park was chosen to host the 2012 London Equestrian events for many reasons, but the major advantage is that for the first time our Equine greats will be right amongst the action!

"Greenwich Park makes an iconic backdrop for the Games. The Park was chosen for a number of key reasons including its close proximity to the Olympic Village (in Stratford on the other side of the Thames)

Using the Park avoids the need to build a new permanent arena. All structures being used in Greenwich Park are temporary and will be removed once the Games end. Also, the Olympic Equestrian teams have almost always been located outside the athlete’s village.  For the first time, in a long time, the Equestrian teams will get the chance to be right in the middle of it all and can be part of the buzz and excitement.

However, given the importance of preserving one of London's most famous Royal parks, the task of transforming Greenwich into an Equestrian venue took a great deal of planning...and I suspect compromise.

"We worked closely with LOCOG, English Heritage, Natural England and the World Heritage Site Executive Committee to protect and conserve the Park. The Park was the site of a Roman temple, and around 600-700 years ago there were Anglo Saxon burial mounds.  Greenwich Park has a number of ancient trees dating back more than 300 years. Plans were implemented to protect these trees and their roots.  Provision has also been made to protect the Park’s wildlife and insects. For example the Park has eight hives with 50,000 bees in each.  The hives were moved to a new home for the duration of the Games.”

Commissioning Andrews Bowen to supply and install the ALL IMPORTANT surfaces to cover the Green at Greenwich, the entire installation had to be completed without cutting into any of the existence turf, and must be removed in it's entirety immediately after the games. 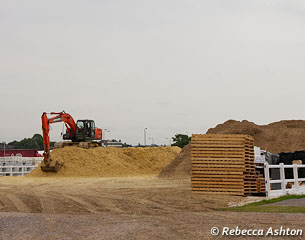 The "Prowax" surface was installed on  ‘Equaflow,’ a unique, patented modular drainage system. The Equaflow system ensures that no contaminated water will seep into the ground or local water courses and water consumption can be drastically reduced, through recycling. The installation areas comprise the Main Olympic Arena, a number of smaller arenas, the final holding area, training areas, walkways and cross country road crossings. Once the athletes have completed their Olympic task, the surface with be available for purchase, with zero going into landfill.

So as the riders take to the arena, they will not only perform for the world, but will do so in a world class setting, with a view of greater London that will only add to the beauty of the wonderful sport: dressage!

"Without a doubt Greenwich Park’s hilltop position allows for one of the most impressive views over London looking across the River Thames to the Docklands and the City of London, between Blackheath and the River Thames.  The view takes in some of London’s famous buildings like the 02, The Gherkin and Canary Wharf  and of course St Paul’s Cathedral."