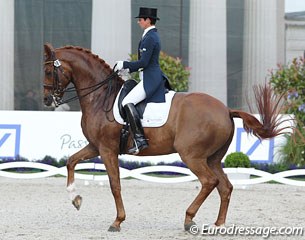 The German Olympic dressage delegation will be departing to London without team reserve horse Whisper. Monica Theodorescu's Baden Wurttemberger gelding is ill and has been replaced by Fabienne Lutkemeier's D'Agostino.

The German Olympic team moves to Tony Pidgley's Kilbees Farm in Windsor, Great Britain on Wednesday 25 July and Theodorescu will not be part of the crew as Ann Kathrin Linsenhoff's Whisper is "ill" according to a statement by the German Equestrian Federation.

Lutkemeier and her Hanoverian gelding D'Agostino (by De Niro x Shogun xx) will be the new travelling reserves. The pair moved to senior Grand Prix level in 2012 after competing successfully on the Under 25 circuit in 2011 and winning three gold medals at the 2010 European Young Riders Championships. 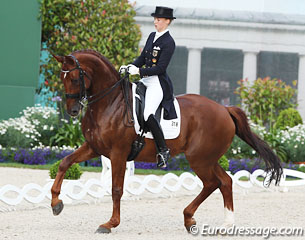 Lutkemeier and D'Agostino will be the back up pair for the selected German team riders Helen Langehanenberg (Damon Hill), Kristina Sprehe (Desperados), Dorothee Schneider (Diva Royal) and individual rider Anabel Balkenhol (Dablino).  The entire German team is made up out of descendants by the great Donnerhall. Three are sired by De Niro, one by Donnerhall himself and one by Don Frederico.

The Olympic dressage competition starts on 31 July with the vet check and the first group of riders will compete in the team test Grand Prix on 2 August 2012.