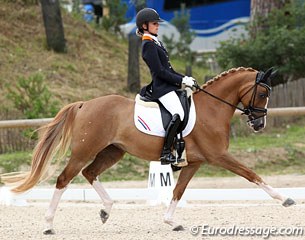 Dutch Rosalie Bos has taken an early lead in the individual test on the third day of competition at the 2012 European Pony Championships in Fontainebleau, France, on Friday afternoon 20 July 2012. With fifty-two dressage combinations taking part at these Championships, the group of riders were split into two for both the team championship and individual test.

The Team Championship test came to a conclusion yesterday with Germany winning gold, followed by The Netherlands and Denmark in silver and bronze medal position. With the team effort completed, the individual riders now challenge each other for two individual medals: a set of three medals contested in the individual test and the fifteen highest ranked riders of that class move on to the Kur to Music Finals on Sunday when they can win another set of three medals.

Twenty-six riders competed today in the first part of the individual test and Dutch Rosalie Bos had a very strong ride on the youngest pony of the Championships, the 6-year old Dutch Welsh bred pony Paso Double (by Bodo x Inselfurst). The combination excelled in their fantastic trot extensions and very expressive canter work. The shoulder in right lacked some self-carriage and the extended walk could cover more ground, but overall there was little to remark on the test.

With the score board and individual break down of scores visible to the audience, the spectators can follow the action live movement by movement, which adds to the pleasure and overall fun factor of the event. The individual test is judged by Saleh (FRA), Christensen (DEN), Holler (GER), Stukelj (SLO) and Sanders-Van Gansewinkel (NED).  The panel awarded Bos an overall score of 75.561%, slightly pushed high by a very patriottic Dutch judge sitting at B (77.683%). 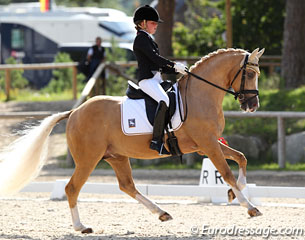 The rider coming closest to Bos' fantastic performance was the young German Nadine Krause on the experienced 9-year old palomino stallion Danilo (by Dornik x Power Boy). The petite 13-year old sat remarkably quiet in the saddle with steady hands and a soft contact with the bit. The palomino stallion has more spring off the ground now carrying less weight on his back compared to the previous, taller rider, but this cuts both ways. On the one hand Krause can not (yet) ride with much power so the overall image is one of velvety, sweet softness, but on the other hand, the pony could be more expressive and bouncy in the canter.  The trot half passes were not entirely regular and the nose should have been more out in the trot work, but the trot extensions were lovely and the walk pirouette was good. The canter was immaculate but could have been more expressive. The German duo scored 75.024% to finish second provisionally. The judges were score-wise on the same wavelength. 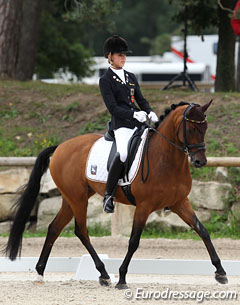 This cannot be said about the assessment of German Lena Charlott Walterscheidt's test on the Baden Wurttemberger bred Equestricons Lord Champion (by Le Champion). The combination ranks third so far with 72.561%, but German judge Holler kept his score at 68.902%, while Slovenian judge Stukelj awarded the test with 75.732%. The score difference could partly be attributed to a difference in scoring the one major mistake which crept into Walterscheidt's ride. Her bay pony made an unscripted flying change in the extended canter and the rider did not execute a proper simple change of leg from counter canter to walk and back to canter. Lena Charlott only made the transition to walk and did a proper left canter strike off, failing to show the counter canter part. Unlike in the team test, in which the pair had two booboos, Walterscheidt had a more obedient pony today. The trot was ridden very safely, which makes Le Champion become slow behind, but the movements were ridden correctly. In canter the pony stood out with his beautiful simple changes, in which Lord Champion took big, clear steps. 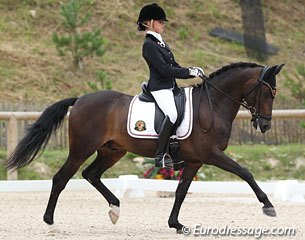 Belgian Lavinia Arl and Equestricons Epiascer (by Ten Ankers Jerolianca x Large River Cleopas) proved in the team test they were on outstanding form, but the pair needed a bit more fine-tuning in the execution of some movements. Trained by Carmen de Bondt, the 14-year old Arl stepped it and scored more with still room left for improvement. Her active dark bay gelding always works very strongly from behind and has amazing suspension and bounce in trot, but the steady cadence gets a bit lost in the half passes. Their shoulders-in were an absolute highlight, as well as the walk pirouette. The counter canter is well balanced, the extensions powerful but in the simple changes Epiascer tends to brake a bit too hard and loses ground cover in walk. The combination scored 71.927% to rank fourth so far.

Danish Kristine Koch Bejstrup and her routinier Dornick Son (by Dornik B) slotted in fifth with  71.561%. The 13-year old chestnut gelding is not the most elastic and extravagant mover in the pack, but they score big time on correctness. The pony is always very steady in the contact with the poll as highest point and his canter work is flawless. Dornick Son makes wonderful simple changes and never loses his balance. In trot there was a communication issue right before the extended trot on the short diagonal, but Koch Bejstrup remained unphazed and continued to focus on a proper completion of her test.