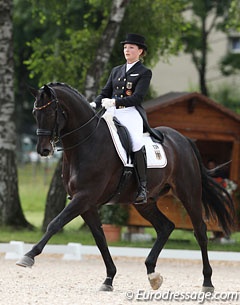 The morning session featured the first group of young riders, two riders per country, for the team competition. The young riders were the first to appear in the arena for the Prix St Georges Team Championship test, which was judged by Adriaan Hamoen, Thomas Lang, Vincenzo Truppa, Isobel Wessels and Dieter Schüle.

Kienbaum and Don Windsor (by Don Cardinale x Waldstar xx) outclassed the competition on the first day of competition in Berne distancing themselves from the pack with an immaculate ride. She rode very accurately and the pair stood out with their fluent, energetic trot work in which the horse stayed nicely in the contact and in front of the aids. A small mistake in the rhythm in the extended trot was the only big blemish in her test. The extended walk was outstanding. Also in canter she was safe and secure with expressive flying changes, but overall the horse could have been a bit fresher and quicker. Only in between the pirouettes her horse dropped behind the vertical. Kienbaum posted a score of 72.842%.

Kienbaum's team mate Louisa Lüttgen finished in a provisional second place aboard her 15-year old Hanoverian gelding Habitus (by Hohenstein x Weltmeyer). The elegant dark bay gelding is always up in the bridle and attentive to his rider. The trot work was fluent but a bit hasty, the extended walk was very nice with good relaxation and ground cover, but the collected walk in between the walk pirouettes lost clarity of rhythm. In canter the four tempi's were very good but there was a mistake in the three's. The pirouettes remain to be the pair's weak point, year after year, with the horse showing no ability to collect and properly sit in the pirouettes. Luttgen rode them way too big and without proper collection. The combination scored 70.868%. 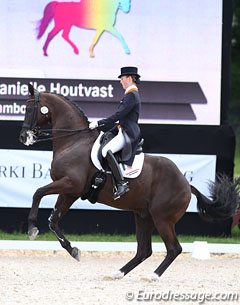 Dutch Danielle Houtvast and her lovely dark bay 14-year old Dutch warmblood gelding Rambo (by Gribaldi x Amor) slotted in third so far. Based with her trainer Leida Collins-Strijk in Riethoven, The Netherlands, Danielle always presents her horse in a nice uphill frame, but today the horse was a bit unsteady in the mouth and opened it regularly. The trot half passes and extensions were lovely, in the voltes Rambo slightly lost his balance in all his forwardness. At the beginning of the extended walk, Rambo curled the neck but as soon as he was steered on the diagonal he properly streteched it. In canter there was a small booboo in the flying change between the half passes and the exit of the pirouette left was problematic. The right pirouette was good and so were the straight, correct tempi changes. Houtvast received 70.500% from the panel of judges.

Houtvast's team mate Michelle van Lanen landed a fourth place on her tall liver chestnut KWPN gelding Urchin B (by Jazz x Vincent). The combination started its test with lots of energy and forwardness in trot. In the first extended trot the horse could have had a longer moment of suspension, despite the sufficient ground cover. In the collected walk the horse could have shown more collection. The walk pirouette right was good but in the left one Urchin took one big step. The extended walk was very nice. Overall the canter work was strong with good four tempi's and pirouettes but the horse became a bit long in the frame and lacked some collection. The first change in the three tempi's was not good from behind. Van Lanen scored 69.895%. 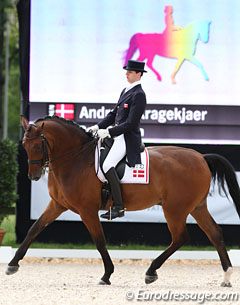 Danish new comer Andreas Kragekjaer completed the provisional top five with a 68.763% earning ride on the 10-year old Danish bred Rozo Soneca (by Romacier x Aleksander). The bay gelding is not the flashiest mover in trot and missed expression throughout the test but was extremely correct in the execution of all the movements. Kragekjaer's team mate Rikke Lindberg and the Grand Prix level trained super star Rigoletto (by Rubin Royal) had a below par performance. The refined bay gelding saw ghosts at the short side at C and spooked on multiple occasions. The gelding has unlimited freedom in the shoulder and is an extravagant mover but Lindberg was unable to filter the tension and angst out of her horse and got 60.368% for her ride.

Germany has taken an early lead in the Nations' Cup with 143.710 points. The Netherlands is in second place with 140.395 points, followed by Great Britain with 133.526 points. Best British rider of the day was Eilidh Grant on the British bred mare Comanche Crumble (by Cassander x Magnum). Grant rode a very careful, clean test with no major mistakes and got 68.684% from the judges.