The Winding Road to Berne 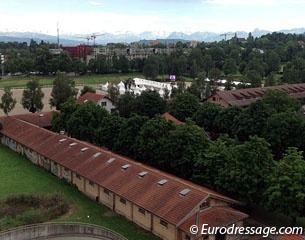 I'm on the road again, but this time I have a travel companion with me, just like I did more than a year ago at the 2011 World Cup Finals in Leipzig. With a week of hard labour ahead of me at the 2012 European Junior and Young Riders Championships in Berne, Switzerland, I enticed my mother to share the journey and join me on the road trip to Switzerland.

I had one day to "relax" at home yesterday after the CDIO Aachen. Initially I had planned on spending some quality time with my loved ones (boyfriend and pets included), not working too much, but I ended up writing my Aachen freestyle report, uploading more than 30 photos, sending out my weekly newsletter, uploading new headers, preparing banners, vacuuming the house, packing a suitcase in addition to doing some other minor, stressful tasks which turned the day in the a gastric ulcer producing one.

I got up at 7 AM this morning, had breakfast with my mom who had arrived at my home late Monday evening. I fed my horse and foal and then we jumped in the car to begin a new journey on the road. The drive through Belgium and Luxembourg into France went smoothly and by the time we hit the Alsace the temperature was spiking to 30° C outside. Tropical heat!

Mom and I had booked a light lunch at restaurant Atelier du Peintre in the historic town centre of Colmar. The drive into town was a bit hectic with crazy French drivers mad-maxing me on the roundabouts and then I got entangled in a labyrinth of small, one-direction streets in the city centre. We parked the car, asked some friendly cops for directions to the restaurant and had a fun lunch there. We ate cold cauliflower soup with crab meat and cod on a puree of peas with bean sprouts and bacon. As a dessert we had a modest plate of cheese and we all topped it off with delicious Alsatian wine from Schlumberger and Dopff. Life is good! 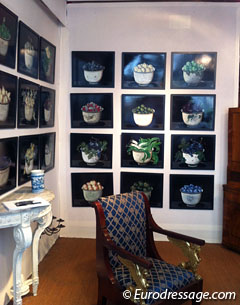 We were in no rush to get to Berne and roamed the streets of Colmar when suddenly we were baffled to spot exhibition of Alsatian oil painter Jacques Feger in a small antiques shop. We have known Feger's work for more than 25 years and the aging painter hasn't exhibited for almost a decade. The shop was closed so we called the owner who came driving by to open his doors 5 minutes later. While we were inside, one of the world's most renowned masterchefs of haute cuisine cooking stepped into the shop as well, Jean Paul Haeberlin of Michelin 3-star restaurant Auberge de l'Ill. It was a pleasant and surprising re-acquaintance with the old cook.

Thinking it might be one of the last chances to buy a Feger painting ever, I ended up purchasing two still iife works: one with blue plums and one white green grapes. It was a splurge, but one I don't regret for a minute.

We then went back to the car and drove to Berne. After crossing the border into Switzerland I was waiting to see the Alps with their snow capped tops. My mom took a nap and missed seeing the first snowy mountains in the distance; a thrilling sight which made my heart leap of joy. Such huge mountains makes you feel very small as a man. 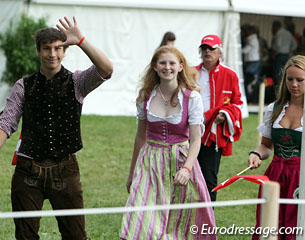 Once in Berne we checked into the hotel which is literally next door to the show grounds. I unpacked my stuff and saw the opening ceremony going on through the window. Mom and I then headed downstairs to the scene to pick up my accreditation and meet with the press staff, Angelika Nido and Heini Staufelberger, as well as Austrian Katharina Wunschek.

We walked through the tent, greeted a few parents and then went back to the hotel to drop off the last bit of stuff that I still had in my car. You should see the tons of equipment, clothes, boots and rain gear I have brought along to make sure I will never be cold or wet at this show (or at least try to!). No more Broholm rain horror for me!!

We hopped on the bus and went into the city to explore the town in search of culture and food. The bos stopped at the station and the first person we saw was a weirdo who was making sounds with his mouth, imitating a firing gun  while positioning his finger in the gun symbol. We crossed the street and a limping hunchback approached us. At the same time we spotted a few vagabands loitering on the steps of a building, looking like they hadn't washed themelves in months. My first thought was, "my God I have landed in One Flew Over the Cuckoo's Nest". 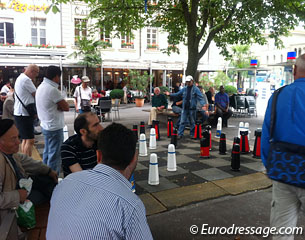 Berne is a lovely city with big old buildings which reminds me of  an old German town centre. We saw the National Bank (welcome to Switzerland) and walked a cosy town square with restaurants all over the place. We picked a small Indian restaurant for a curry and then headed back to the hotel to do some work and get ready for the first day of competition.