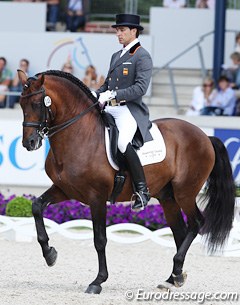 Jose Daniel Martin Dockx and the PRE stallion Grandioso have been appointed the travelling reserves for the Spanish Olympic team that will compete at the 2012 London Olympic Games on 2 - 9 August 2012.

Martin-Dockx and Kimberly van Kampen's Grandioso (by Adelante) have shown excellent form at the 2012 CDIO Rotterdam and 2012 CDIO Aachen to earn their position as reserves for the team.

Beatriz Ferrer-Salat's top horse Delgado was withdrawn from the Aachen Grand Prix Kur but chef d'equipe Bobby Fernandez de Bobadilla confirmed to Eurodressage that the horse is fit to compete for London.

"Delgado is competing in london. We retired him for a swollen leg due to a skin problem," de Bobadilla told Eurodressage.