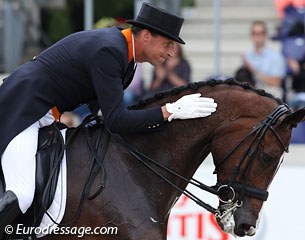 Van der Meer and Schellekens-Bartels were sent to Aachen for a final ride-off following the two official Dutch observation trials in Hoofddorp and Rotterdam. Coach Janssen was still unsure who to pick and asked both riders to compete in Aachen as final test.

"Of course I'm very happy that I can go to London, but my joy for the progression we made is even bigger," Van der Meer explained. "In Hoofddorp he did three good tests. To my feeling Rotterdam was even better and now I'm even more happy about the Grand Prix and Special than in Rotterdam. This is good for my self-confidence. Let's hope we can continue to progress at the Olympic Games."