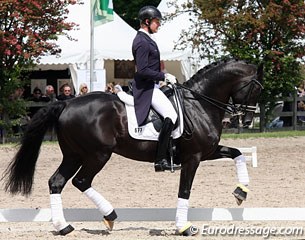 Since Totilas moved to Germany in the autumn of 2010 the wonder horse has brought about an equal amount of worries and headaches compared to the joy and euphoria he brought to the German dressage scene.

After being unable to win an individual medal at the 2011 European Dressage Championship, the 2012 show season has been far from a walk on roses for Totilas and Rath.  An injury in the winter was the beginning of a period of troubles. The failed first viewing at the Paul Schockemohle stallion show in Vechta, where the horse threw his tongue out, upset the crowds. Then they made the scene tremble by announcing that they would find salvation with Dutch team trainer Sjef Janssen, an action which shook Germany at its classical dressage core.

A fantastic performance at the 2012 CDI Hagen seemed to turn the tide, but at the first German Olympic selection trial the unbeatable horse was beaten by German's new hot favourite, Helen Langehanenberg on Damon Hill. A few weeks later Team Totilas released the news that Rath would be unable to ride the second mandatory German Olympic selection trial in Aachen due to mononucleosis, causing dressage selectors to review their rules and make a decision behind closed doors whether or not Totilas earns Olympic nomination.

Mononucleosis is a debilitating disease from which patients suffer for months, but Rath seems to be making a miraculour recovery in two weeks time and Team Totilas is sending out positive reports through its new media liaison BILD, a German mainstream publication.

Totilas' tumultuous road to the Olympics has been the centre of attention of many publications, equestrian and maintstream. Today the big player STERN posted a lengthy article about the woes Totilas has caused and the magazines questions the horse's Olympic selection which, according to them, could be highly based on bias.

The decision whether Totilas goes to London or not, lies in the hands of the DOKR Dressage Selection Committee which includes Klaus Röser, Ulrich Kasselmann, Heike Kemmer, Jonny Hilberath, Dennis Peiler and team vet Cordula Gather.

Stern questions the fact that two members of the committee are closely connected to Totilas' owner Paul Schockemohle. Kasselmann is Paul's long-time business partner and Roeser is director of Schockemöhke's marketing company.

"The dressage committee decides, not one individual," German team trainer Hilberath told Stern. "The committee does not only consist of those two persons. I'm sure an objective decision will be made." Hilberath is aware that the situation might be conflicting. "We are aware of it and that's why we'll take extra care to be objective."

Roeser was also interviewed by Stern and he said that "I'm aware of the commotion," and that he "understands" the appearance of bias "but I do the job as neutral as possible."

Hilberath and team vet Gather have visited Totilas at home and checked if the horse is fit. On Friday 6 July the selection committee will go back to Kronberg to see Matthias Rath in the saddle. The young rider has been staying in bed as much as possible to strengthen up and save his energy, while the stallion has been ridden by his father Klaus Martin Rath.

"It's all up in the air," Hilberath explained about Totilas' Olympic selection. "It all depends on the doctor and the diagnosis. He (Matthias) is hoping he'll be fit on time."

Related Links
Matthias Rath and Totilas Withdrawn from Competing at 2012 CDIO Aachen
Rath, Bechtolsheimer, Sprehe on Their Magical 80% Scoring Day at 2012 CDI Hagen
Janssen Not to Train Matthias Rath Until after 2012 London Olympics