Progress of the 2012 London Olympic Venue 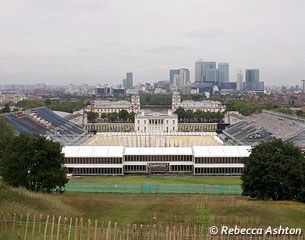 With the Olympic Games less than a month away, I was expecting to see completed stables, preened arenas and perfect landscaping when I paid a visit to Greenwich Park earlier this week. The royal park on the eastern outskirts of the Olympic city will be home to the equestrian events.

Instead, images of Athens 2004 came to mind; construction work taking place right up until the opening ceremony. With the equestrian venue a temporary fixture at Greenwich, there is still a lot of work to be done.

To be fair though, the landscaping is complete. There has been activity on this site since the Roman times and the remains of a Roman structure can still be seen. More impressive though is the Royal Observatory, built by Sir Christopher Wren in 1675. The royal park, the oldest in London, was also the birth place of King Henry VIII and his daughter Elizabeth I who, it is said, spent a lot of time on One Tree Hill, a prominent point in the park, contemplating her kingdom.

From the top of the hill where the Observatory is located, the view of London and The Thames is stunning. The main competition arena is situated lower with an impressive backdrop of the Queenʼs House built in the 1600s by Inigo Jones, now the National Maritime Museum. Although the arena surface is down, there still remains about half of the 23,000 seats to fit. 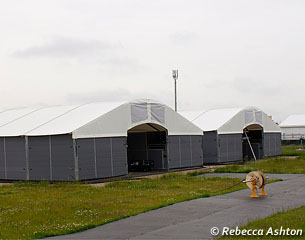 West of the main arena are warm up arenas, one covered, and stables, all elevated so to protect the ground. Being a UNESCO World Heritage Site, one of the conditions of using Greenwich Park as an Olympic venue was that it is to be left as it was found once the Games have finished.
Rangerʼs Field, located at the top of the park will see the start and finish of the cross country. More used to local genteel cricket games, the open area is now covered in white tents. There is not one cross country fence to be seen within the bounds of the 73 hectare park. They were all removed after the test event. Once reconstructed, the course will be tight and hilly which will not only be a challenge to horse and rider but the estimated 40,000 spectators. It will be a tight squeeze!

Just outside the park entrance is Blackheath. This open stretch of land has seen its own fair share of history. It was the location of the Peasantʼs Revolt in 1381, Henry VIII met his fourth wife , Ann of Cleaves here and it was also the location of the first English golf club. The lonely stretch of Roman road between Dover and London that passed through this once desolate location, was also home to many a wayward highwayman. 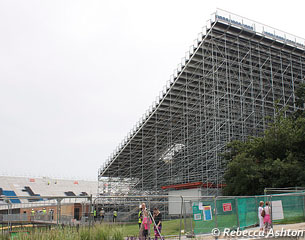 Today, part of the heath has been fenced off to cater for the majority of the Olympic stabling. Although most of the temporary tents have been erected, the area is still very much a building site.

Although there is still a lot of work to do, there are no better organisers than the English, and there is no doubt that not only will the venue be finished on time, but it will look a million dollars......or quite a few million if the cost of hosting the event is considered! Yet another historic event will be added to the annals of this famous, 500 year old park.

Text and Photos by Rebecca Ashton