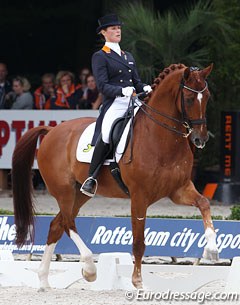 Holland's number one combination, Adelinde Cornelissen and Parzival, passed their mandatory go-see competition at the small national show in Ermelo on 30 June 2012. Missing out on both obligatory Dutch Olympic observation trials due to fitness issues, Cornelissen was ordered by the Dutch Equestrian Federation to prove fitness in Ermelo in order to be considered for the Dutch Olympic Team.

Facing no competition whatsoever in a field of 12 riders, Cornelissen freewheeled to victory with an 81.13% score despite a few hiccups. The panel of three judges did not entirely agree on the performance. Judge Jan Peeters scored the test 84,06%, judge J. Peutz-Vegter awarded the Grand Prix ride 83,84% and I-judge Els Mouw scored it 75,54%, which entailed a 8,52% difference!

Cornelissen commented that she was very pleased with the performance of her 15-year old Dutch warmblood gelding Parzival (by Jazz x Ulft). "I think we put down a very good test and I'm very happy with an 81.13% score," said the Nijkerk based rider.

"I was very impressed. Especially at the beginning of their Grand Prix test the combination was very strong," Janssen commented. "At the end Parzival got a bit tired, which made him make a few small mistales. I'm convinced Parzival will become more stronger in his fitness the next few weeks, so these mistakes won't be made."