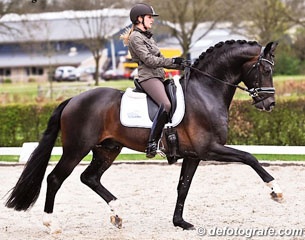 The German equestrian federation has requested a wild card to enter the Canadian owned, German bred and Dutch ridden stallion Connaissuer for the 2012 World Championships for Young Dressage Horses in Verden, Germany, 1 - 5 August 2012.

Because Connaisseur (by Con Amore x Donnerhall) is German bred, he competed in the German WCYH selection trial last week in Warendorf under Dutch Emmelie Scholtens, but the dark bay licensed stallion was not selected. The German equestrian federation is limited to sending seven horses per age division, but wants to request  wild card to boost their entry limit up to eight horses. Horses.nl reported that a wild card has been requested for Connaisseur.

The 5-year old Connaisseur is licensed for the Westfalian, Dutch warmblood, Swedish Warmblood and Belgian warmblood society. He was discovered in Germany as a 2-year old by Ad Valk, who soon sold the young stallion to Canadian Sara Pocock. Connaisseur was leased to the Swedish National Stud at Flyinge as a three year old, where he became the fourth highest producing stallion in Sweden in 2010. The horse then returned to Holland and went in training with Emmelie Scholtens. The duo competed at the 2011 Pavo Cup Finals in Ermelo, The Netherlands.