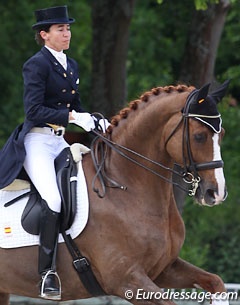 The Spanish Equestrian Federation (RFHE) announced today the riders which will represent Spain at the 2012 Olympic Games in London, Great Britain, on 2 - 9 August 2012. Team trainer Jan Bemelmans and chef d'equipe Bobby Fernandez de Bobadilla had no surprise in store in their selection of the Spanish team.

The team reserve rider will be decided upon after the 2012 CDIO Aachen, where Carmen Naesgaard (Ciowa), Jose Daniel Martin Dockx (Grandioso) and Ignacio Rambla (Fogonero) will compete in the CDIO tour alongside Ferrer-Salat.