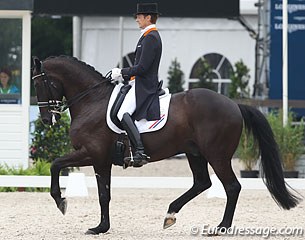 Even though Dutch team trainer Sjef Janssen took the option to nominate the Dutch Olympic Team after Aachen, he has already announced the the three team competitors at the end on Sunday 24 June 2012 after the 2012 CDIO Rotterdam. Based on the performances of the riders at the two Dutch observation trials in Hoofddorp and Rotterdam, Janssen nominated the three team members.

The Dutch team riders are

The fourth individual rider for The Netherlands will either be Imke Schellekens-Bartels on Toots (by Jazz x Havidoff) or Patrick van der Meer on Uzzo (by Lancet x Indoctro). Both combinations have to do a ride-off at the 2012 CDIO Aachen in two weeks.