Matthias Rath and Totilas Withdrawn from Competing at 2012 CDIO Aachen 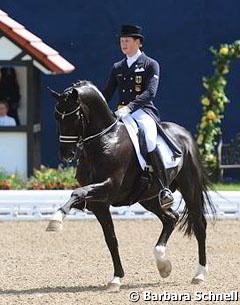 Matthias Rath and the Dutch warmblood stallion Totilas will not be competing at the 2012 CDIO Aachen on 4 - 8 July 2012. The 27-year old Kronberg based rider is ill with glandular fever (Ebstein Barr Virus) and has to take a break from riding.

The German team doctor Dr. Manfred Glensch has been in touch with Rath's physician and commented that, "we unfortunately had to order Matthias Alexander Rath not to be active in sports for 12 to 14 days to avoid complications." During this break Totilas will be ridden by Matthias' trainer and father, Klaus Martin Rath.

The 2012 CDIO Aachen is a mandatory German Olympic team selection trial and "normally" not participating in them automatically rules a rider out from Olympic contention. As Matthias is currently Germany's number two, team trainer Jonny Hilberath and team veterinarian Dr. Cordula Gather will travel to Kronberg next week to get an update on the fitness and training level of the stallion.

On Friday 6 July, two days before the Olympic nominations by the German dressage selectors, a final evolution of rider and horse will be made by the team trainer, team veterinarian and a member of the dressage committee.

The vacant spot on the German CDIO Aachen team will be filled by Dorothee Schneider and the 10-year old Diva Royal. The German team is now constituted by Helen Langehanenberg, Kristina Sprehe, Anabel Balkenhol and Dorothee Schneider.