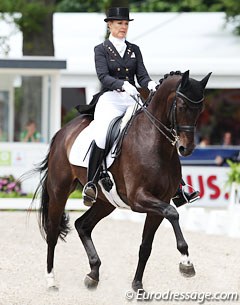 The FEI has today published the list of nominated entries for the London 2012 Olympic Games.  The list details the athletes and horses that have achieved the minimum eligibility standards required for London 2012, and qualified National Federations will make their final selection of teams and individuals from this list.

Athletes and horses had from 1 January 2011 to 17 June 2012 to achieve the minimum eligibility standards in the three Olympic disciplines.

The deadline for the National Olympic Committees to submit definite entries to the London Organising Committee for the Olympic and Paralympic Games (LOCOG) is 9 July. The definite entries will name the 200 athlete/horse combinations that will compete at Greenwich Park in the 2012 Olympic equestrian events – 50 in Dressage, 75 in Eventing and 75 Jumping.

The list of nominated entries for the London 2012 Paralympic Games is currently being validated in FEI Headquarters and will be published shortly. The deadline for the definite entries for the Paralympic equestrian events is 6 August.