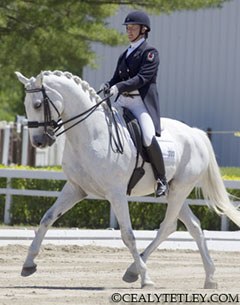 Following the results of the final Canadian Olympic selection opportunity at the 2012 CDI Blainville this weekend, the Canadian equestrian federation saw which four riders topped the ranking and will constitute the Canadian team for the 2012 Olympic Games in London, on 2 - 9 August 2012.

The Canadian team will include:

The first reserve is Diane Creech on Doug and Louise Leatherdale's Devon L, the second reserve is Pia Fortmuller on her own Orion.

Prior to the Games, these top five Canadian team riders will go into training camp at Natalie Allen's yard in Great Britain. The horses fly out of JFK in New York on Monday 25 June 2012 and they will compete at the CDI Hartpury (4 - 8 July) as practise show before heading to the camp.