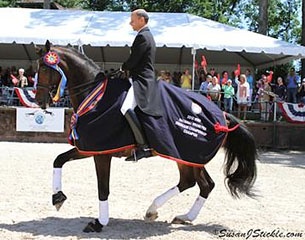 Four years ago, Steffen Peters and Ravel, then an inexperienced 10-year-old, won the 2008 U.S. Grand Prix Championship at the Festival of Champions in California. That performance earned the pair a trip to the Olympic Games where they were fourth. Four years, an FEI World Cup title, a CHIO Aachen victory and two Bronze medals at the FEI World Equestrian Games later - Ravel was granted permission by the USEF selectors to not attend the 2012 U.S. Championships

, which was also serving as the American Selection Trial for the 2012 Olympic Games.

So Peters (San Diego, CA) brought Four Winds Farm's Legolas 92 to the USET Foundation Headquarters instead. The result was the same. The 10-year-old Westphalian gelding, who was imported in December has won his first National Championship. It is Peters' sixth, tying the record previously set by Robert Dover.

Their score of 77.956% was enough to give them a four day average of 77.653% and left them less than one point clear of the runners-up Tina Konyot and Calecto V. They had the ride of their lives in Friday's FEI Grand Prix but settled up second today and overall. Peters knew what he had to do to take the National title and he succeeded.

"I tried to look at the overall picture," said Peters. "Coming into this Legolas had a three percent lead over Tina and I knew Tina had a 77 so a 74 today would have done it. I looked at the scoreboard during the extended walk - I was going straight at it and it was an 82, so I thought let's just relax a little bit for the canter work. Unfortunately the mistake in the two tempis... The horse, at this stage, you can see how green he is - it's mentally confusing... Out of all four days I think today he did the most exciting piaffe and passage and that's an exciting feeling. He wants to do it and I really can't believe how generous this horse really is."

Small mistakes in the one-tempi changes showed up in earlier tests at these championships, but today those were clean on the centerline. Peters works patiently on the flying changes while the rest of the work continues to improve exponentially, especially the piaffe and passage. 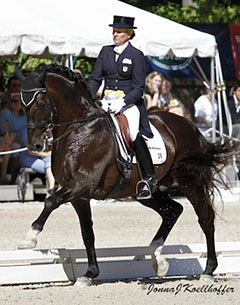 "Its not a physical issue - its clearly a mental issue," said Peters of the flying changes. "Each day you have one or two tries to get the one tempis done. If you try the third time and its not happening then he gets really nervous... At the moment its just patience."

While Legolas will be the back-up for Ravel for the Olympic Games, Peters knows that this horse's best is still yet to come.

"It would be a bit soon for the Olympic Games (for him)," said Peters. "He could do it - but I get good reports from (wife) Shannon on Ravel."

Ravel is in California training but arrives in New Jersey on Tuesday to continue his Olympic preparations.

Konyot was thrilled again with her 14-year-old Danish Warmblood stallion. A new found focus with the support of the USEF Technical Advisor, Anne Gribbons, has helped Konyot produce personal best scores throughout these Championships.

"My highlight is being here and being part of this," said Konyot. "It was my dream always to be on an Olympic Team. I went to my first Olympics in 1976 as a little girl and I told my parents I'd like to do that. Yesterday was the highlight of the week, the ride I had and the score I got. There are no words for it." 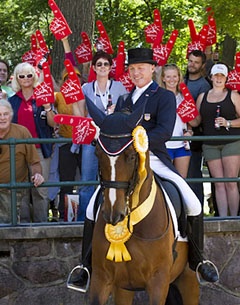 Jan Ebeling (Moorpark, CA) and Rafalca continued to up their game, and delivered again - this time with a 74.889% to bring their third place total to 73.169% over the four classes.

Rafalca, who has drawn mainstream media attention lately due to her co-owner Ann Romney, who owns the 15-year-old Oldenburg mare in conjunction with Beth Myers and Amy Ebeling. Romney's husband is, of course, on the campaign trail for the United States' presidency. Steve Colbert, host of Comedy Central's Colbert Report has made dressage the "Colbert Report Sport of the Summer".

"This is a dream come true," said Ebeling. "I looked at the score board one time (during my ride) and it looked good so I didn't look again."

This competition was the culmination of a long road, one which which continues onto London for the Olympic Games. Adrienne Lyle had to outdo herself to keep her Olympic dreams alive and she did with a score of 73.558% - considerably her highest score of the competition. Their cumulative score of 74.588% cemented their fourth place finish

Lyle (Ketchum, ID) and the 13-year-old Oldenburg gelding train under the tutelage of two-time Olympian Debbie McDonald. They excelled today in what Peters referred to as a 'life-changing ride."