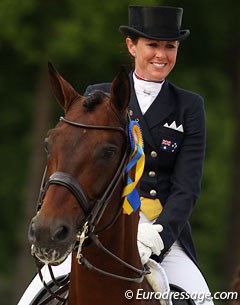 On Thursday 7 June, Equestrian Australia’s national dressage selectors identified the three horse and rider combinations to be nominated to the Australian Olympic Committee for selection to the Australian Team that will compete at the 2012 Olympic Games in London on 2 - 9 August 2012.

The horse and rider combinations are:

Equestrian Australia can confirm that during that period, a rider has lodged an appeal which will be heard by an independent tribunal in due course. During this time Equestrian Australia and the Australian Olympic Committee are unable to make further comment.

A reserve rider has not been announced.