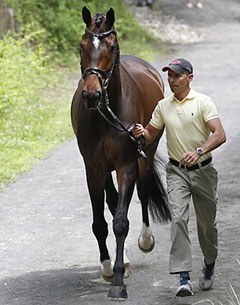 The 2012 USEF Dressage Festival of Champions continued on Sunday 10 June 2012 with the second part of the Grand Prix National Dressage Championship which also serves as the USEF Selection Trial for the 2012 Olympic Games - which finishes next Saturday. Steffen Peters refused to loosen his grip on the Grand Prix title with Legolas - repeating yesterday's winning effort to close out the first half of that championship.

The overnight leader of the 2012 USEF National Grand Prix Dressage Championship continued his winning streak, scoring 77.933% in the Olympic Grand Prix Special test to take a commanding lead at the halfway point of the Championship.

Peters (San Diego, CA) and Legolas 92 made light work of a very difficult test despite the fact it was only the third time they have contested it. The most decorated active dressage rider in the US has forged a quick relationship with Four Winds Farm's 10-year-old Westphalian gelding. Legolas 92 arrived in December from Germany and Peters continues to improve their partnership.

They won the Grand Prix yesterday and backed it up today in the Special with an improved effort.

"It was definitely a cleaner test," said Peters. "Throughout the season here and there we've had a mistake in the one-tempis on the centerline or on the diagonal. This is the first time we've gotten them both (on the centerline and on the diagonal) so that's very exciting. The bottom line is making it clean through the test. I can't really get on the throttle with him it's just a bit to soon."

Legolas' piaffe and passage are very solid and those movements are a huge part of the Olympic Grand Prix Special Test. His walk and flying changes continue to improve for Peters but the overall quality of the work is exceptional.

"The piaffe and passage felt great even the trot extensions felt a little bit better," said Peters. "It was very relaxed and supple - it was fun to ride."

The top two placings remained unchanged - Tina Konyot continued to press the pace set by Peters. She rode her own 14-year-old Danish Warmblood gelding to a stunning effort, one of the best they've produced, to score 76.667%.

"It felt great," said an emotional Konyot. "It felt just fabulous, so honest and in front of my leg and very elastic... Anne Gribbons has been such an enormous help to me and my horse."

The halfway point of the Trials, Todd Flettrich (Royal Palm Beach, FL) jumped up to third in the standings with an improved effort over Saturday's Grand Prix test with Cherry Knoll Farm's 16-year-old Danish Warmblood, Otto.

Flettrich rode more confidently in the Special and it was evident in the veteran gelding's effort career best Grand Prix Special score.

"Otto was great," said Flettrich. "Otto is getting a bit older and I'm getting older and I think we're getting better. He did everything I asked of him. He puts his big heart into everything we do."

With the temperature on the rise and two busy weeks of competition, Flettrich amended his strategy slightly with an abbreviated warm-up.

"I shortened my warm-up and it helps him do a better job in the ring," said Flettrich. "He's an experienced Grand Prix horse but also he is older and he needs a little time to loosen up but I can predict him a little bit. We did a great job together - as a partnership."

Flettrich can rely on Otto now that they have spent so much time in the ring together and takes responsibility for Saturday's fourth place effort not being one of their best.

"Yesterday I didn't ask enough of him," said Flettrich. "But he is so honest."