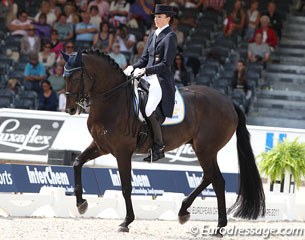 Swedish Olympic team candidates Cecilia Dorselius and Nina Hofmann have seen their Olympic hope dashed as both their horses are injured in the lead-up to the 2012 Olympic Games.

This mid-season rest for both horses disrupts the Olympic qualification show schedule and puts them out of Swedish Olympic contention. One of the criteria set by the Swedish chef d'equipe Bo Jena and Swedish Olympic Committee (SOK) is to show form during the outdoor show season.

Dorselius had planned on competing at the CDI Wiesbaden but her Westfalian gelding Lennox (by Laurentianer x Florestan) suffered from a skin condition and had to be treated medically, which ruled them out for the show. The condition is not severe and not located near the bridle or saddle, but it will be unlikely that Lennox will be back in top shape on time to vie for a team spot.

"The Olympic Games have been a goal for almost seven years and of course it's really sad not being able to continue the fight for a team spot," Dorselius explained. "I try to see it positively and instead try to focus on the fact that me and my loved ones are all healthy. It could have been worse with Lennox. There are far worse things in life. Now I hope the treatment will work well and can make a quick come back." 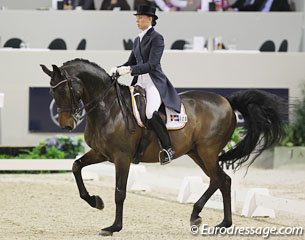 "It takes longer to heal than I and the vet expected," Hofmann explained. "Even if all goes well, we won't make it back on time into the show ring to be considered for the Olympics."

Swedish chef d'equipe Bo Jena stated that he is "disappointed that Cecilia and Nina can not continue their show season as planned." Jena need to find a third team rider and one reserve as Patrik Kittel and Tinne Vilhelmson are already selected. The choice will most likely be between Rose Mathisen (Bocelli) and Minna Telde (Santana).