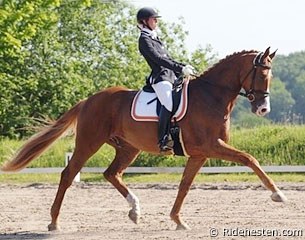 At the second Danish qualifier for the WCYH Selection trial in Aabenra, Denmark, nine horses were able to obtain a qualification ticket for the official Danish selection trial held at the Middelfart Equestrian Centre on 30 June - 1 July 2012.

The Aabenra qualifier was the second out of three. Six 5-year olds and three 6-year olds stood out in the field: