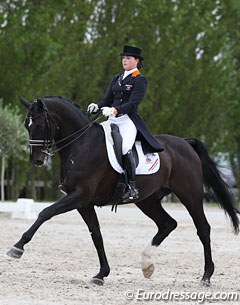 The large delegation of Dutch young riders were on a roll at the international youth riders' competition CDIO-PJYR at equestrian centre Zilveren Spoor in Moorsele, Belgium, on 17 - 20 May 2012. While there were three different winners in the CDIO tour, Dutch Anne Meulendijks wielded the axe of power in the CDI-tour with three wins.

The 18-year old Meulendijks, who has gone professional by starting a job at Tineke Bartels' Academy in Hooge Mierde, steered the 16-year old Dutch warmblood Ohio (by Indoctro x Akteur) to a triply victory, scoring 70.30% in the team test, 71.053% in the individual test and  73.333% in the kur to music.

"Whoohoo, I won the finals with Ohio," said an elated Meulendijks. "It was a super fun and cosy competition." Meulendijks is focusing on Dutch team selection for the 2012 European Young Riders Championships, which are held in Berne, Switzerland, 11 - 15 July 2012.

In the CDI Team Championship Test Meulendijks tied for first place with Sanne van Grotel aboard Showtime. The Westfalian gelding by Show Star, which was acquired by the Van Grotel family at the Equine Elite Auction, scored 70.30% as well giving his rider a share in the victory. In the Individual and kur to music Stephanie Kooijman and her second Young Riders' horse Ulysse (recently renamed Utility) finished second twice. In the individual the dark bay stallion by Jazz x Rouletto received 70.570% from the judges, in the kur he got 72.000%. Dutch Lotte Jansen and Grecian Angela Sklavounos were close completing the top three during the weekend. 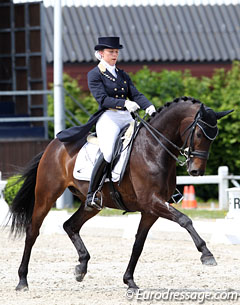 The fight was tough at the top of the leader board in the CDIO-tour of the young riders divison. Three different winners in three classes showed how much these talent young riders are on each others' heels. The team championship test was won by Dutch Stephanie Kooijman on the Dutch warmblood gelding Winston (by OO Seven). The powerful black mover excelled in the trot work but is still green in the canter, struggling to sit in the pirouettes. They scored 70.658% to beat team mate Danielle Houtvast on Rambo (by Gribaldi) with a fraction of a point (70.570%).

In the individual test Belgian Saidja Brison edged out the Dutch competition on her Swedish warmblood gelding Moliere (by De Niro x Amiral). The light-footed dark bay gelding earned 71.404% points to win the trophy. Houtvast and her gorgeous black gelding Rambo were second again with 70.965%. 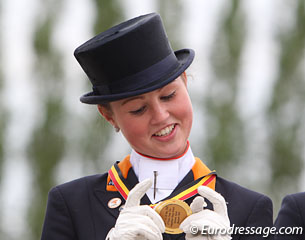 The Puth based Houtvast persevered in the Kur to Music and became the number one in the class with a 74.958% earning freestyle. Trained by Leida Collins-Strijk, the 20-year old Danielle has put herself in a strong position for Dutch team selection for the European Championships. Stephanie Kooijman and Winston were the runners-up in the Kur with the same score of 74.958%.

"With such results they (the Dutch youth riders)  are very inspired for the upcoming Dutch Championships," Dutch chef d'equipe Tineke Bartels commented. "Their results were very hopeful to inspire the riders for even better performances, because the competition will be strong at the European Championships."