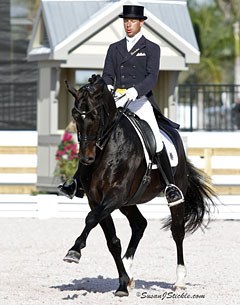 David Marcus, 31, of Campbellville, ON, took another step on the road to the 2012 London Olympics, winning both the Grand Prix and Grand Prix Special at the CDI3* Canada Classic, an international dressage competition held May 18-20 in Burlington, ON, Canada.

Having only received his Canadian citizenship in December, Marcus scored his first international grand prix victory with a win in Friday’s Grand Prix at the CDI3* Canada Classic.  Riding Chrevi’s Capital, owned by Deborah Kinzinger, Marcus earned a score of 68.681%.  The final ride of the day belonged to 2008 Canadian Olympian Jacqueline Brooks aboard D-Niro, but her score of 68.234% was not enough to knock Marcus out of top spot.  2011 Pan American Games Team Gold Medalist, Cesar Parra of the United States, scored 67.213% with Van the Man to place third while Marcus also took fourth, earning a score of 66.447% with Don Kontes, also owned by Kinzinger.

“Chrevi’s Capital had a personal best score of over 68%, even with a few significant mistakes,” said Marcus, referring to his Grand Prix test on Friday.  “The mistakes were not in the difficult movements, but in the extended trot, which is usually a strong movement for him, in the passage to canter transition, and then I made a rider error on the placement of my second canter pirouette, which was very costly for me.  Those are all things that are usually quite strong for him so, going into Saturday, I knew they were easy mistakes to fix.  To still earn over 68%, even with those mistakes, was pretty great!”

In Saturday’s Grand Prix Special, Marcus widened the gap between himself and the competition, posting a career-best score of 72.356% to win over Brooks who earned 69.578%.  All five international judges awarded Marcus a score of over 70 percent, giving him not only the highest score of his grand prix career, but also one of the highest scores obtained by any Canadian dressage competitor in the 2012 Olympic qualifying process.

“The best way to describe my ride was that it just felt easy,” said Marcus of Saturday’s Grand Prix Special performance with Chrevi’s Capital.  “He was on my aids and I was basically guiding him around; it was so simple.  He really wanted to be there for me, and it all felt very easy.  We were able to clean up our mistakes from Friday, and the judges rewarded us for it.”

“I am ecstatic!” said Marcus of his horse’s aptitude and growth at the top level of the sport.  “He is only five and a half months into his grand prix career, and he has already moved up 10 percentage points in his scores from his grand prix debut to this competition.  He still wasn’t at full capacity, and I know there is so much more potential in there.  I am excited to see where he can go!”

Previously ranked fifth overall in the race for a spot on the 2012 Canadian Olympic Dressage Team, Marcus expects to move into third place once the scores from the CDI3* Canada Classic are calculated.  The Canadian Dressage Team will take four horse-rider combinations to the 2012 Olympic Games where three will compete while the fourth acts as the alternate.

For the past three seasons, Marcus has been training with Robert Dover, a six-time Olympian for the United States.

“It was such an asset to have Robert here for this competition, he gave me a lot of confidence and support,” said Marcus.  “I give him a lot of credit for how far Chrevi’s Capital has come in such a short amount of time and how happy and reliable he is in his work.  I was thrilled that Robert was able to join me this weekend.”

In addition to Chrevi’s Capital, Marcus rode Don Kontes in the grand prix division.  Having also made his grand prix debut earlier this season, Don Kontes had a serious setback in his training last summer when he underwent colic surgery.

“We did the best we could for where he is in his training and development,” said Marcus of the 12-year-old Swedish Warmblood gelding sired by Don Schufro that was purchased in Sweden.  “He is very green in his grand prix career, and hasn’t yet had the mileage that Chrevi’s Capital has had.  I know he is going to be great with more experience.  I am thrilled to have two such high quality grand prix horses.”

Don Kontes was originally purchased in 2009 as a mount for his owner, but after seeing the bond that formed between horse and trainer, Kinzinger generously passed the reins over to Marcus.

As the owner of Chrevi’s Capital and Don Kontes, Kinzinger was thrilled with the results at the CDI3* Canada Classic, especially as it takes Marcus one step closer to representing Canada at the 2012 Olympic Games.

“This is a true ‘Cinderella story’ with everything coming together at the right time,” said Kinzinger of the road to the London Olympics.  “There is the boy from Nebraska who dreamed of one day riding at the Olympics; the owner whose greatest passion is for horses; and a six-time Olympian who has the vision and knowledge to coach at the highest level.  At the center of the story is the horse we simply call ‘Capi’, whose heart is as big as the Canadian flag we hope to ride under.”

In addition to his own success, David coached four students in the International Equestrian Federation (FEI)-sanctioned division of the CDI3* Canada Classic.  Ally Dunlop earned victory in the FEI Junior Team Test riding Danero while Alexandra Reid won the Young Riders’ Freestyle with an impressive score of 69.12% riding V.I.P.  As the CDI3* Canada Classic competition site in Burlington is located 10 minutes from Marcus’s training center, David Marcus Dressage, many of his clients and their friends and families came out to watch and support.

Having lived in Canada since he was 18 years old, Marcus obtained Canadian citizenship on December 28, 2011, and made his Canadian Team debut in the CDIO3* Wellington Dressage Nations’ Cup in Florida in April.  The CDI3* Canada Classic marked the first competition on Canadian soil for Marcus as a new citizen.  He will next compete at CDI3* Lexington, Kentucky, from May 24 to 27 before determining his next step on the road to the 2012 London Olympic Games.