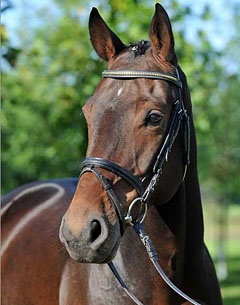 Tessa Frank and Count Helmut von Fircks' Westfalian gelding Stern von Nymphenburg were the winners of the 6-year old Bundeschampionate qualification class held at the 2012 CDI Munich, where the World Dressage Masters were taking place on Friday 18 May 2012.

Johanna von Fircks placed second on her father Helmut's Westfalian stallion Dream of Nymphenburg (by Dark Fire x Disco Prince). The bay stallion scored 7.5 for trot, 8 for canter, submission and general impression and 8.5 for walk. With an 8.0 she was second and together with the winner the only rider able to qualify her horse for Warendorf at the trial in Munich.

Back to the 2012 Bundeschampionate Index