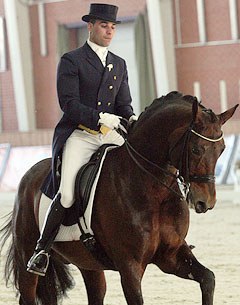 Dutch born Moroccan Yessin Rahmouni has achieved the Minimum Eligibility Score (MES) to compete at the 2012 Olympic Games in London, Great Britain, on 2 - 9 August 2012. Rahmouni obtained a nomination for the Games by becoming the Group F winner on the FEI Riders Rankings on 1 March 2012 but had not yet qualified Floresco NRW, the horse purchased for him for the Olympics.

Rahmouni had switched nationality after Princess Lalla Amina (aunt of the Moroccan King) approached him in 2011 and decided to sponsor Yessin's 2012 Olympic campaign aboard Patrik Kittel's 2008 Olympic horse Floresco NRW (by Florestan). Lalla Amina acquired Floresco NRW for Yessin to ride in November 2011.

At last weekend's CDI Zhashkov in Ukraine, Rahmouni and Floresco achieved their second 64% MES score and can now officially ride Floresco at the Games in London.