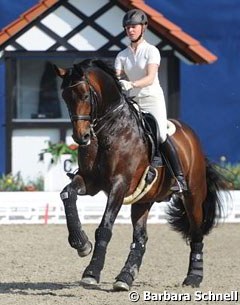 Austrian number one Grand Prix rider Victoria Max-Theurer has been officially nominated for the 2012 Olympic Games in London by the Austrian Olympic Committee (OOC).

The board of the Austrian Olympic Committee met on 9 May 2012 and nominated 13 Austrian athletes across the disciplines for the 2012 Olympics. Austria now has 37 athletes selected for the Games so far.

On 9 July 2012 all Olympic athletes of all nations have to be nominated as it is the official closing date of the London organization.

Max-Theurer is selected with her Oldenburg stallion Augustin OLD (by August der Starke x Rohdiamant) and the London Olympics will be her third in her career.

The first reserve for Austria is Renate Voglsang with her bay stallion Fabriano (by Florestan).