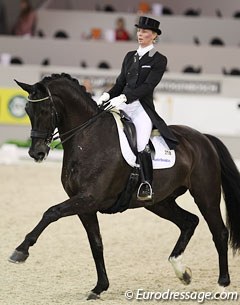 Based on her achieved results at the 2012 CDI 's Hertogenbosch, Imke Schellekens-Bartels and her horse Toots have been submitted to the 2012 Dutch Olympic A-team. At Indoor Brabant Schellekens got her third A-team score.

"The Grand Prix at Indoor Brabant went well, but not as well as in Addington", Schellekens explained. "Still I was happy with the test. I learnt  more. The next day I was sharper, had a shorter warm up, because it's relatively warm in the indoor arenas, and I had a better feeling. The kur was not composed for Toots, but I was happy with the technical part. The choreographical part will be better once the new kur is finished."

Schellekens-Bartels has made it no secret that she is totally aiming for a Dutch Olympic team spot with her rising star Toots (by Jazz) and she has competed at some national shows as well as the CDI Addington, leading up to the international show in 's Hertogenbosch.

"On Monday all A and B-team riders met in Amsterdam for a team meeting," Schellekens said. "We were told what is to be expected in the future."

All Dutch A-team riders, who want to go for an Olympic spot, are required to compete at the trials in Hoofddorp and Rotterdam.

"We will all be competing against each other and important scores need to be achieved there," she said. "And then the Games are no longer far away."

After Den Bosch Toots gets a week of holiday. "Afterwards we'll get back to work to improve the technique and we'll work towards the selection trials. It's all coming closer and getting more exciting, but also more fun."