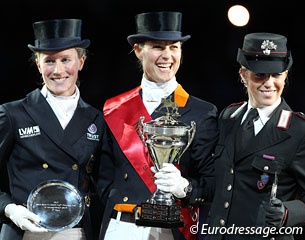 Dutch number one Grand Prix rider Adelinde Cornelissen grabbed her second, consecutive World Cup title by winning the kur to music at the 2012 World Cup Finals in 's Hertogenbosch, The Netherlands, on Saturday afternoon 21 April 2012. In front of a sell-out crowd of 9,500 spectators Adelinde achieved the high score in front on home turf, but it was German Helen Langehanenberg who became the winner of hearts.

Bagging a purse of 56,000 euro, Cornelissen was all smiles when she saw a winning total of 86.250% flash on the jumbotron. The 32-year old put in a very solid, high performance freestyle with the predictable highlights, but the ride was not as flawless as the normal Cornelissen recipe prescribes. The trot half passes were wonderful, the tempi changes straight and uphill, and the double pirouettes on the spot. The passage was lightfooted and graceful, but Parzival's bubbly energy and activity in passage and piaffe is directed upwards instead of forwards, so the horse often becomes croup high instead of shifting the hind legs underneath the body towards the point of gravity. The extended walk was good with nice stretch in the neck and much overtrack, the collected walk was pure in rhythm. 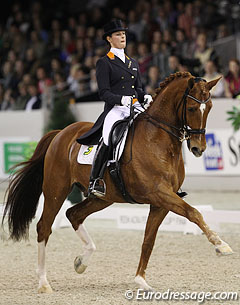 While Adelinde usually rides totally faultfree, her freestyle at the World Cup, with music from the Nutcracker and Swan Lake arranged by Pyntago Productions, was not her most accurate performance to date. There were three bobbles in the test: a minor glitch in the first piaffe, a mistake in the one tempi's on the centerline, and a clear loss of balance and rhythm with a double beat behind at the end of the piaffe pirouette. Adelinde's music is well in tune to her horse's gaits and appeals in its simplicity.

Adelinde scored 86.250%, but the judging panel of seven (Clarke, Hoevenaars, Törnblad, Fouarge, Wüst, Judet, Rockwell) was clearly divided about her score and ranking. Five judges had her first, but Wust and Judet placed her second. Her score ranged from 82.875% (Tornblad) to 89.625%% (Rockwell), which is a difference of 6,75 % (!!). This might be indicative of a few issues: some judges are influenced by the halo-effect (the name of the rider) and want to conform to peer pressure or, most likely, it proves that the system and format of judging the freestyle (not the judges) are inadequate: the scores for the artistic part of a test fluctuate way too much and become too dependable on taste instead of being gauged by facts presented in the arena. Adelinde's artistic scores ranged from 84% to 93% and she was certainly not the only rider which such gigantic differences in her marks. (See video of Adelinde's ride)

Langehanenberg, Favourite of the Critics 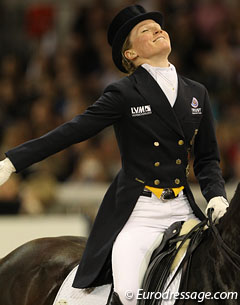 German Helen Langehanenberg certainly must have made the judges' job difficult with her magnificent ride on her Westfalian licensed stallion Damon Hill NRW (by Donnerhall x Rubinstein).  She could easily have placed first considering the mistakes Adelinde made. Helen was definitely considered the winner of hearts by many spectators and critcs on the sideline. It's worth speculating if she would have grabbed that World Cup title had the Finals not been in Holland.

Langehanenberg and Damon Hill exemplified what dressage is all about: gymnastics of the horse while advocating lightness and harmony. Since the 2011 European Championships Damon Hill has matured tremendously: he's able to stay up in the bridle at all times and carry his rider through the test without losing his breath. With these problems worked out, Damon Hill has become one of the best dressage horses in the world definitely ranking him amongst the medal contenders for the London Olympics.

Riding to beautiful film music and self composed pieces arranged by German freestyle designer Michael Erdmann, Langehanenberg started her ride with piaffe, passage and trot extensions to the rhythm of the music. She made the technically very difficult movement of passage, half pass passage, followed by trot half passes in the oppositive direction. 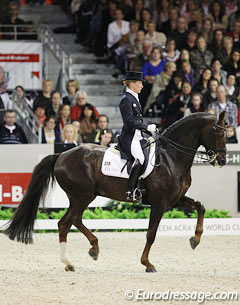 There was a small communication error in the passage half pass to the right and this would remain to be the only "mistake" in Helen's test. The passage, though, is extraordinary. The liver chestnut stallion bounces 40 centimeters off the ground with the hindlegs under the body. The extended walk was brilliant. The canter work was performed to emotional, epic music supporting the gaits of her horse and taking the spectator on a journey through her ride. The tempi's were super, the canter half passes big. Only in one double pirouette to the left Damon Hill became a bit exuberant in the rhythm. At all times, Helen was the invisible rider in the saddle given aids almost undetectable to the eye. It was dressage pure which makes the sport so incredibly exciting. 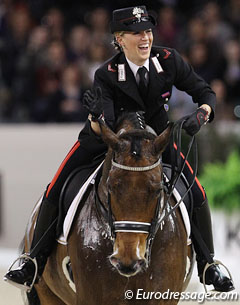 Italian Valentina Truppa and her Italian bred Eremo del Castegno (by Rohdiamant x Weltmeyer) were able to maintain their third place achieved in the Grand Prix. The chunky bay gelding has amazing piaffe and passage talent, springing with much activity and lift from the ground, but at the start of the ride he was a bit fixed in the back and not swinging through the body as a relaxed athlete should do. Also in the trot extensions, he's spectacular in front but has trouble generating overtrack.

Valentina's upbeat music of Italian medleys (O Sole Mio, Marina Marina) is a definite crowd pleaser due to its recognizability. Highlights of her test included the canter zig zag, the one-handed one tempi's after which she patted Eremo on his butt (provoking laughter from the crowds), and tempi changes on curved lines. The degree of technical difficulty was upped at the end of the ride: an extended trot with a direct transition to piaffe followed by passage and piaffe half pirouettes changing direction. The last minutes of the ride were a bit overwhelming with the high amount and repetition of piaffe and passage which he executes like a routine trick. The combination could improve overall on achieving more lightness in the bridle with the rider standing less in the stirrups and holding her hands so high.

The duo concluded their winter fairytale season after a victory in Frankfurt with a 81.232% score to finish third at the World Cup Finals in Den Bosch. Valentina ranked between third and fifth with the judges. They were quite in unison on Truppa's technical scores but for the artistic part her marks ranged between 81.00% and 93.00%.  (See video of Valentina's ride)

With Cornelissen, Langehanenberg and Truppa filling the podium at the 2012 World Cup Finals, three young dressage ladies proved to be armed and dangerous for the summer Olympics. Since the sale of Totilas, Cornelissen has become more used to having free reign on the scene and snatches trophies wherever she appears. Langehanenberg was the first rider in a while truly breathing down her neck.

"Helen rode a really good test and I knew I really had to sharpen him (Parzival) up a bit," Cornelissen said about her preparation for the freestyle. She added that even though she is testing new music, she probably will stick to her old freestyle (Est. 2009) for the Olympics. 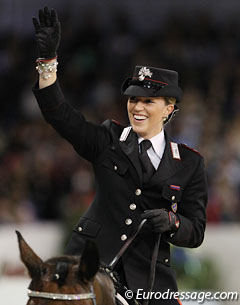 Langehanenberg admitted she wanted to give it her all in the Kur. "I tried to give everything we can. It nearly worked out," she said at the press conference. "I tried to make it difficult for her (Adelinde). She is such a great rider and has ridden so many great tests." Helen will give her horse a long break now and only reappear with him at the German Championships in Balve in June.

Truppa acknowledged that her scores benefit from her popular music. "This type of music is very good for the public; an Italian rider with an Italian horse with Italian music," she said.

FEI Judge General and head of the ground jury, Ghislain Fouarge commented that Langehanenberg could have beaten Adelinde with a different floorplan. "All three did a top performance," the Dutch judge said. "Helen is a very elegant rider who can easily beat Adelinde at this moment if she had a higher degree of technical difficulty."

When Cornelissen was asked if she feared the competition, she replied "I'm not afraid. I'm not at 100% which I'm planning to be in London. I'm not worried."

In the land of predators, the lion never fears the jackal.