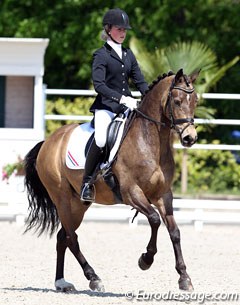 Sanne Vos and her buckskin Champ of Class won the fifth qualifier of the 2011-2012 KNHS FEI Pony Cup held at Stable Olympic in Uden on Sunday 15 April 2012. Plagued by bitterly cold weather, the Dutch pony riders had to compete outdoors for the first time this show season. With a score of 70.81% she topped the leader board well ahead of all competition.

There is no rest for the weary. Sanne Vos and her 8-year old German Riding Pony Champ of Class are storming through the competition circuit as if involved in a relentless stampede. After winning the fourth FEI Pony Cup Qualifier in Assen on 24 March, it was straight onwards to the 2012 Dutch Indoor Pony Championships in Brummen, then the CDI Stadl Paura in Austria followed by the FEI Pony Cup Qualfier in Uden, where she won her fifth qualifier in a row this winter season.

"Champ of Class only needs a bit of time in the field to play and he's ready for the next challenge," Vos commented on the reason why there has been so little rest for her young gelding early in the 2012 show season.

Judged by Drohm, Van Oers and Terra, the FEI Pony Cup qualifier in Uden featured 36 riders, which also got the opportunity to ride a second, individual test on the same day not part of the show circuit.

"Winner Sanne Vos was a league of her own," said judge at C Monica Drohm. "But even with her there were a few moments of tension which prevented her from getting a higher score."

"The top ranked riders distinguished themselves from the rest by their riding and feeling," said the judges. "This is educational for the others who can pull themselves up to their example."