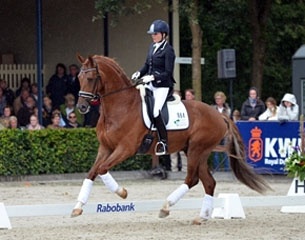 Twenty-five horses were selected on the long list for Dutch representation at the 2012 World Championships for young dressage horses in Verden, Germany, on 1 - 5 August 2012. Fifteen 5-year olds and ten 6-year olds were picked by selectors Ernes, Hamminga and Van den Hoorn on the first official WCYH observation trail in Ermelo on Tuesday 10 April.

The first selection day started in rainy weather at 8.30 in the morning with the 5-year olds which each had to perform the preliminary test. Twenty-seven 5-year olds were registetred to compete and fifteen made the cut. Twenty-six 6-year olds were entered and only 10 were selected to continue the qualification process. Thanks the size of the KWPN society, Holland is allowed to send 6 combinations per age division to Verden.

The selected combinations are: