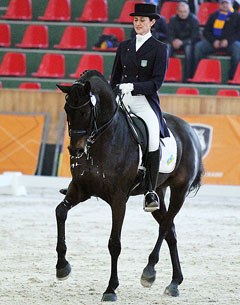 The Equestrian Federation of Ukraine has approved the qualification procedure for individual athletes aiming for participation at the 2012 Olympic Games in London. At a board meeting on 6 April the plans concerning preparation and participation of Ukrainian athletes at the Olympic Games were discussed. Ukraine is eligible to send one dressage combination to the Games.

The members of the meeting took the following into consideration:

The results of the Grand Prix that will be held on 12 May 2012 in Zhashkiv will define the line-up of the Ukrainian short list. The short listed riders will then participate in one of the events taking place in Western Europe in the period 15 June – 9 July, 2012.

As the Ukrainian leader on the FEI World Individual Dressage Ranking Svitlana Kiseliova gets an automatic place on the short list and has receved a waiver to participate in the qualifying competitions in Zhashkiv.

The rider who shows the best result in Grand Prix in one of the events taking place in Western Europe in the period 15 June – 9 July, 2012, will get the right to represent Ukraine at the Olympic Games.

If the difference between the best result and the result of the next rider is less than 0.5 %, the advantage will go the rider whose position on the FEI World Individual Dressage Ranking as of June 2012 is the highest.