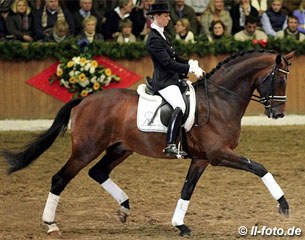 Twenty-seven horses have been entered for the Wild Card Day on 27 March 2012 during which selectors will pick two horses per age category which can continue the Dutch selection process for the 2012 World Championships for Young Dressage Horses in Verden, Germany, begin August 2012.

The Dutch Equestrian Federation and KWPN society work together in choosing the Dutch team. The combinations, which get selected for the young horse training session and selection trials, are picked at an assessment day. The 30 best horses of the 2011 Pavo Cup, as well as the 5 and 6-year old Subli Cup Championship horses, are amongst those invited for that day.

Each year a special wild card day is hosted as well for riders who believe they have a special horses, which did not compete in last year's Pavo Cup or Subli Cup. This wild card day takes place in Ermelo, The Netherlands on Tuesday 27 March 2012 and starts at 10.30h.

The registered horses for the wild card day are:

The first official selection day is on Tuesday 10 April 2012.