Gero Busselmann: Quo Vadis, Are We Approving the Wrong Stallions? 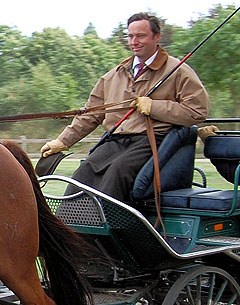 Guest columnist of the week is Dr. Gero Büsselmann. Born in 1965, Büsselmann is a biologist, who grew up in Oldenburg as a farmers son. He is a rider from early childhood, FN trainer C-licence and FN level II Silver performance medal four-in-hand driving. Today Gero works as a lecturer at the "Mediq Akademie" in Oldenburg on public health and physiology and as a writer on science and equestrian subjects.

In November 2011 the Oldenburg society organized a discussion evening about the future of German horse breeding. After attending the event, Büsselmann sent the following letter to the editor of the Oldenburg magazine Pferdeforum.

Quo Vadis - Are We Approving the Wrong Stallions?

First and foremost I was very happy that this event took place. The guest list was very interesting and the proposed viewpoints were informative. This event, however, failed in one aspect: a fair and balanced discussion with the right arguments. Why was that?

Uwe Heckmann was supposed to serve as moderator. A person like Uwe Heckmann is not neutral from the start, in breeding circles he is even controversial and does not befit a moderator, even though he did a good job. As participant in a discussion he cannot be missed, but as moderator he was wrongly appointed!

Gerd Sosath rightly commented that, just like at political debates on television, each verbal contribution of the invited experts should be coherent and logical. Instead they were contradicting each other and confusing the auditors.

This created the false impression that biology and reproduction scientists do not have conclusive answers. This is wrong! As a biologist I want to say the following: all so-called experts are on the one side highly qualified and know what they are talking about. At the same time, none of them are neutral scientists, but they were there as lobbyists and/or representatives of certain societies and stakeholders' groups and were not there as neutral on a scientific level.

Selection was the trending topic. In the final stage the breeder decides which stallion he picks and not the stallion licensing committee. However, with regard to the breeders there is a massive failure in transparency about biologically relevant and insightful data for the end-user. The layman does not understand the FN breeding index of the German Equestrian Federation and the stallion owners are commenting on it was derision. As a biologist I say: a breeder can not make a sensible selection without scientifically objective and understandable data input.

For example: 10 good foals from 10 breedings are better than 10 from 500 coverings. It is also proven that Olympic horses are not born but made by trainers. When the big players push their stallions on the market, they create a clear marketing advantage, which is not based on genetic data. The Oldenburg society does not disclose any statistics to the public about the amount of breedings per stallion, about their fertility rate, nor about the amount of foals nor the amount of premium foals.

It has been assumed as natural that the breeding goal is to breed as many Olympic horses as possible and the market for amateur riding horses will automatically be appealed as a by-product by those horses which are considered not good enough for professionals.. The discussion, which was dominated by Uwe Heckmann, brushed aside the desires of 95% of the riders, the needs of those who do not wish to compete at shows or those who don't care about performance sport.

Finally, when we live up to our own riding principles, we know that a horse is only mature as of the age of six (or even later). In the equine medical world it is undisputed that in the elite "performance sport circus," which includes the stallion licensing procedures and Bundeschampionate, horses get pressured way too early. If ones looks at all the participating horses and not just an individual case, this is significantly proven on a statistical level.

In contrast, 95% of the riders are more concerned for animal welfare than a German or Olympic champion. Not the activist nor riding sport hater from extremist animal welfare groups make the life of breeders hard. The riding end-user, the committed amateur rider and horse lover himself are calling for more animal friendly licensing and breeding procedures.

Those who don't need money or goodwill can continue on their path like before and might soon be trampled by a few facts. Firstly several "foreign" breeds are quite successful in Germany, e. g. Pura Raza Espanola, Quarter Horses and Friesians and there is an increasing market competing with the German warmblood. Secondly more and more equestrian magazines report negatively and aggressively about the Bundeschampionate, rollkur and unfair training methods in professional stables. After the doping scandals in 2008 and 2009 (Werth, Ahlmann, Kutscher) the German Equestrian Federation became defensive and TV-stations threathened to stop broadcasting equestrian events.

The public as well as the political parties in Germany react quite sensitively to the animal welfare movement as well as  to the rising eco-friendly awareness of its citizens. It has become a reflex in Germany to prohibit it all. Which breeder, for instance, would have expected that the German political parties Bündnis90/Die Grünen and SPD would prohibit horse branding in 2011. When the current government loses the majority, this theme will be back on the agenda and the limitation of performance sport by riding and non-riding animal activists will take priority once again. The road of activists does not necessarily go via the national parliament. Animal welfarists know that the road via the EU legal system leads to their goal much more quickly.