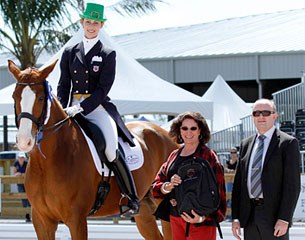 Fifteen horse and rider combinations from seven different countries competed in the Global Dressage Festival's large Stadium on a clear, breezy day.  At the completion of the class, Roffman and Pie were the clear winners with a score of 69.289%.

Roffman rose up through the ranks of the Dressage Young Riders program and has become a top contender in the FEI small tour at the Global Dressage Festival this season.  Her scores with Pie, (Hanoverian by Worldly, out of WorldLady) have been in the upper 60s for the last two CDIs.

"It's Pie's 10th birthday tomorrow," said Roffman.  "I trained him myself with the help of my coach Lars Petersen. He has exceeded my expectations."

"Sue Stickle had a St Patrick's Day top hat that I could wear if I won," said Roffman.  She had to ask the Ground Jury's permission, and they unanimously agreed that St. Patrick's Day is indeed a special occasion in need of celebration, so the hat was brought out for the presentation picture.

Shawna Harding and Rigo, a ten year old Hanoverian by Rotspon, out of Winnepeg (Weltmeyer) took second place with 68.526%.

"Overall I think his performance was really good," Harding commented. "He tried to stay with me. He's a fantastic horse and he does really try."

Shelly Francis and Doktor scored 67.500% to take third place in the Intermediare 1 class.